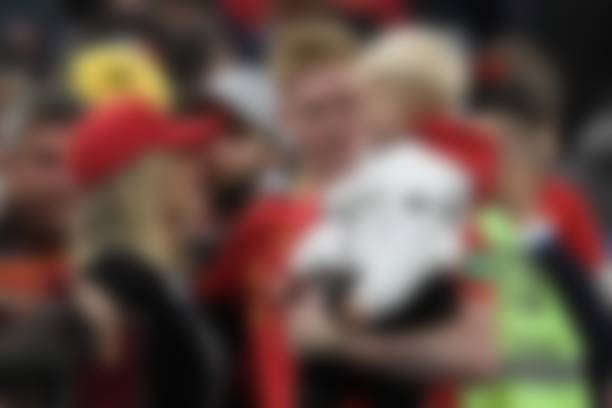 Kevin De Bruyne is now one of the best players on the planet, up there with Cristiano Ronaldo and Leo Messi and he currently plies his trade with Manchester City in the Premier League.

Today we have a look at Kevin’s life off the pitch instead of on it and in particular his wife and his family life.

In 2014 Kevin was in a relationship with Caroline Lijnen. She was found to be cheating on the City ace and to make matters worse, it was with his national team teammate in Thibaut Courtois. As it normally goes with these kinds of things, Lijnen stated that Keven cheated on her first and she was just getting back at him, and as you can imagine he was distraught over this.

From the outside at least it seems as if he has patched up his relationship with Courtois and the pair are said to be ok now.

Michele Lacroix and Kevin started dating back in 2014 when he was playing in the Bundesliga for Wolfsburg. The Belgian ace revealed that the pair started dating after he sent a message to her on Twitter.

Kevin spoke about the type of girl Michele is and what she has done for him in their relationship.

“She helped me grow in ways that I’ve probably never expressed out loud — even to her,” he said.

“It started with a tweet. I only had a few thousand followers at the time, because I was still on loan at Werder Bremen. So I tweeted something about a match or whatever, and this pretty girl favourited it.”

In 2015, after dating for nearly a year, the pair announced that Michele was pregnant with their first child and that they were going to be having a baby boy.

Who is Michele Lacroix?

Lacroix is from Genk and she studied in Belgium at the University of Hasselt. Michele who is 26 years old, worked as a promo girl and hostess for Prime Impressions which is based in Hasselt.

Michele is not a regular at Kevin’s games in Manchester and she spoke about the impact de Bruyne has had on her life.

“She changed my life in so many ways. Honestly, I don’t know what I would do without her,” said De Bruyne about his wife.

The pair got married back in December of 2016 as Kevin proposed in Paris at the Eiffel Tower and a couple of months later, they got married in Italy in the town of Sorrento.

As we said earlier the pair announced in 2016 that they were expecting their first child and on March 10 they welcomed Mason Millian de Bruyne into the world. Just two years later, on October 31st in 2018 revealed that they welcomed their second baby, a boy who they named Rome de Bruyne.