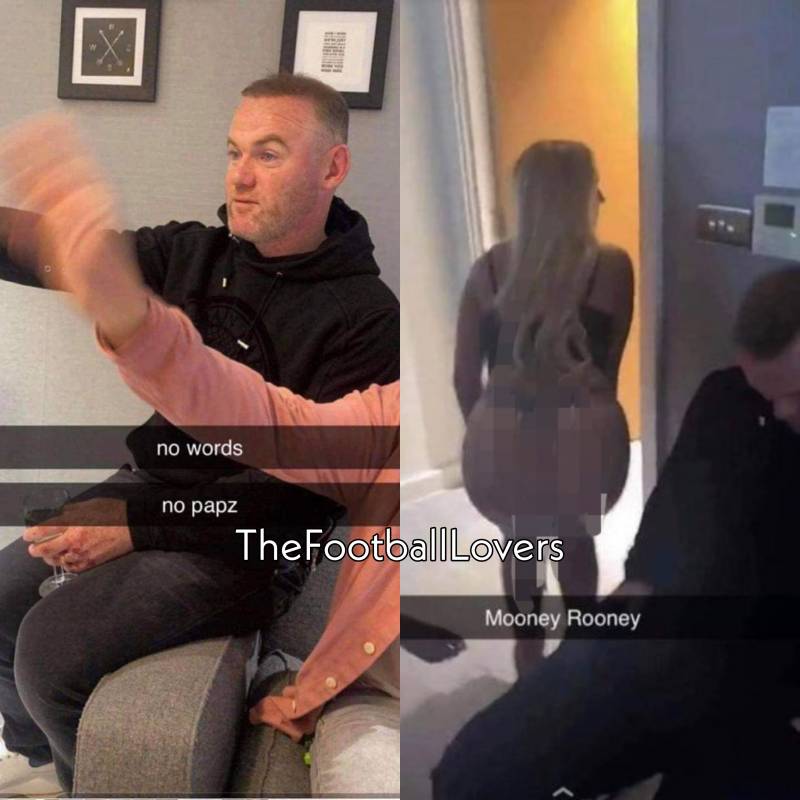 Manchester United’s former striker and legend Wayne Rooney caught cheating on his wife allegedly during a night out. It seems like that the former Manchester United frontman was having a mad night out and he just couldn’t resist. So, the Derby County manager decided to have extra fun with a sizzling blonde woman. But here’s the problem – Wayne Rooney is married so he will be in trouble with his wife Coleen Rooney.

Wayne Rooney is a legend of Manchester United’s history. He has been a tremendous footballer and a great servant for the Red Devils. Wayne Rooney also tops the list of all-time goal-scorers for Manchester United, having scored 253 times in 559 appearances for the club.

However, the former Manchester United frontman seems to have some disciplinary issues. Wayne Rooney has been reported for disciplinary misconduct many times in the past, and he’s once again in the dog house after being pictured with numerous women on a steamy night out.

Images of Wayne Rooney caught cheating on his wife have been leaked on the Internet again. Poor Wayne Rooney is going viral on Twitter for allegedly sleeping with two women in a hotel room. These pictures were initially leaked on Snapchat but have since found their way onto Twitter. Since then, the former Manchester United frontman has been trending on Twitter, making fun of him.

Pictures of Wayne Rooney Allegedly Cheating with Other Women

Pictures of Wayne Rooney have been circulating on Twitter after he was caught sleeping with two blonde women in a hotel. In the picture below, we can see a fully-clothed man who looks remarkably like Wayne Rooney sleeping on a chair. Meanwhile, one woman grabs a selfie and another semi-naked woman lays on a bed behind them.

In the next picture below, Wayne Rooney can be seen kissing a blonde girl who is sitting on his lap. It is not clear where this picture was taken. However, users on Twitter believe it was taken in London’s China White nightclub, due to the particular logo displayed in lights behind the snap.

Another image from Snapchat with the caption “Mooney Rooney” is attached below. The image below appears to show a blonde woman in small black G-string underwear pushing her bum towards Wayne Rooney, who looks to be passed out.

In 2004, The Sunday Mirror reported that a teenage Wayne Rooney had cheated on his then-girlfriend with a prostitute. The prostitute’s name was found out to be Charlotte Glover. A month later, it was reported that Wayne Rooney paid at least 10 visits to a brothel in Liverpool. It was reported that Rooney slept with Gina McCarrick, then 37, and Patricia Tierney, a 48-year-old grandmother nicknamed the ‘Auld Slapper’ who wore a rubber catsuit.

Wayne Rooney admitted his mishaps later on. He said: “Foolish as it now seems I did on occasions visit massage parlours and prostitutes.

“I now regret it deeply and hope people may understand that it was the sort of mistake you make when you are young and stupid. It was at a time when I was very young and immature.”

“It was years ago and it was all out of my control when it happened and I have made massive, massive mistakes that I do regret.”

Helen Wood also claimed that Wayne Rooney was full of remorse, claiming he told her: “Why the hell did I do that?

“I feel really s*** already – I’m begging you two not to say anything. It will ruin my marriage if it gets out. Having a kid means everything to me.”

The whole situation looks very bad for Wayne Rooney. Knowing that he is married, no doubt he will have big trouble with his wife. It must be really embarrassing for Wayne Rooney and his family. Everyone is entitled to drink and have fun at a night out, but when you are married, you have to be a little more careful.

Though it seems Wayne Rooney spent his time in the room completely passed out. But the girls seem to have made fun of Rooney while he was asleep. It is also understood that there was no sexual contact. We believe it was a set-up to gain publicity by using Wayne Rooney.

The people involved in this whole situation are also part of the problem. Is this the way the lads across the pond treat their sporting royalty? By women putting married men on blast online and then literally blasting farts on them? There is some decorum we feel should be followed for the sporting legends of your country.