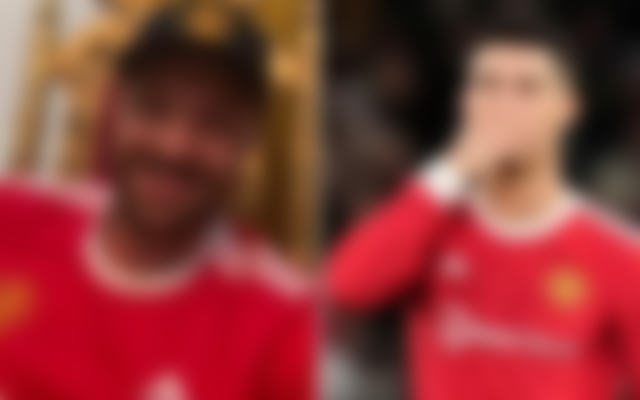 Tyson Fury has analyzed Cristiano Ronaldo’s return to Manchester United, and his analysis may be the most realistic one so far. In the summer of 2021, Ronaldo moved back to Manchester United from Juventus. He had a productive season individually, scoring 24 goals across all competitions.

However, it did not come without a price. The Red Devils had their lowest-ever point total, which resulted in them finishing sixth in the Premier League.

In a recent interview, WBC heavyweight champion and United supporter Fury was questioned about Ronaldo, and he responded by suggesting that the five-time winner of the Ballon d’Or may be stifling the development of some of the younger players.

He said the following in an interview with The Mirror: “It’s fantastic news that Ronaldo is staying on, but here’s a theory: when they didn’t have him the season before last, they were second in the Premier League, and then we got Ronaldo, and we came sixth.

People are going to say things like, ‘Well, if we hadn’t had him scoring 20 goals last season, we would have ended a lot lower.’ However, we didn’t have him score 20 goals the season before, and we finished a lot higher.

When you have a superstar like Ronaldo, everyone depends on him to score goals, and if he wasn’t there they’d be scoring the goals themselves, as they did the season before last. I’m not saying that he’s a bad asset, he’s a great asset, but sometimes with a star player, he carries the team and the young people are overshadowed by it all. They don’t get their chance to shine because ‘the great Ronaldo’ is on the pitch.”

Marcus Rashford scored 21 goals for United in the 2020/21 season, helping the team finish in second place. He was an essential component of the offense. In the previous campaign, he scored just five goals and often seemed exhausted while playing on the field.

United had been looking to get Jadon Sancho from Borussia Dortmund for several years. He joined the club a few months before Cristiano Ronaldo did. The England international was not able to justify his price tag of £73 million and will be looking for improved performance in the next season.

In the past, Old Trafford games used to be something that Fury never missed, but in recent years he has found it more difficult to do so.

Following his victory against Dillian Whyte in April, “The Gypsy King” has said that he would no longer compete in boxing. He acknowledged that he would want to go to more games in the future and outlined everything that Manchester United needed.

He continued by saying, “They need someone strict, like Sir Alex Ferguson, who is going to tell them what to do and, if they’re not listening, say, ‘It’s the bench for you, I don’t care how good you are or how famous you are, you’re not playing until you decide to work hard.'” He was referring to the fact that the players were not putting in the necessary effort.

“When I say ‘team,’ I mean that everyone does their part. They don’t depend on anybody else to score the goals or run for them. That’s what the term ‘team’ implies.”

What it comes down to is everyone putting in a lot of effort for a single cause and a shared objective, and that’s winning. I don’t know the first thing about managing a football team, but I do know all there is to know about winning, and I know that everyone needs to chip in for the team to be successful. If I try to win a world championship by going to the gym by myself to train for it, I probably won’t be very successful,” Tyson added.