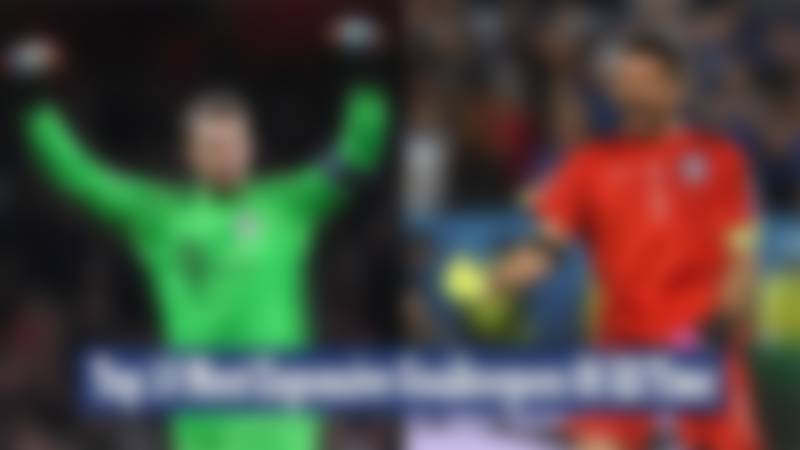 Today we are going to list down the top ten most expensive goalkeepers in the world. Football is not just about scoring goals but it’s also about having a good defense at the back. And a good defense is often led by a good goalkeeper who acts like a leader. The goalkeeper position has grown into one of the most in-demand roles in football. Every club needs a top goalkeeper in their squad. Not only can they improve a team’s defensive record, but these players can make the difference in their title race.

The Demand for goalkeepers has been increasing by each passing football season. The importance of having a good shot-stopper at the back can be explained by Liverpool’s goalkeeper example. Liverpool struggled to win important finals due to lack of quality at the back. They spent big on a goalkeeper and brought Alisson from AS Roma. They went on to win the Champions League in the first season with Alisson who made crucial saves on the way to the glory. The following season, Liverpool went on to win the Premier League title with Alisson at the back. So a quality goalkeeper is very important in a team’s success in different competitions.

The demand for goalkeepers in the transfer market has seen some of the big clubs spend a lot of cash on the shot-stoppers. In the last two decades, prices have risen to astronomical figures. Now we will take a look at some of the most expensive goalkeepers in the footballing world and are they even worth their price tag?

Is he worth the price tag? He has kept 31 clean sheets in his first 87 games and won the Europa League with Chelsea in the 2019/20 season. But stats don’t tell the whole story always. Kepa has made many errors in his Chelsea career and fans weren’t happy about it. Most Chelsea supporters think he is not worth the price tag.

Only after 2 seasons at the Stamford Bridge, his first-choice goalkeeper career seems over following the transfer of Mendy from Rennes. Mendy has kept 5 clean sheets in his first 5 starts for Chelsea.

The Brazilian first-choice goalkeeper enjoyed a great start to his career at AS Roma before he was transferred to Liverpool in 2018. After horrific mistakes from Loris Karius in the 2018 Champions League final, Liverpool decided to spend big on a better goalkeeper. Alisson was in their sights. Liverpool needed a solid shot-stopper and paid £65m to bring in Alisson to Anfield and that transfer made him the most expensive keeper transfer of that time.

Thibaut Courtois enjoyed a decent career at Stamford Bridge. He also played an important role in his national team and performed really well in the FIFA World Cup 2018 with Belgium. His solid performances at the back attracted the interests of European big dogs. With his contract entering his final year in 2018, Real Madrid came to the scene and paid £35million to bring the Belgian to Santiago Bernabeau.

The transfer of Thibaut Courtois from Chelsea to Real Madrid in 2018 made him the most expensive goalkeeper in the world of the time. He struggled in his first season with Los Blancos but at the moment it seems like he has settled at Santiago Bernabeau. The Belgian international won the La Liga last season with Real Madrid and also won the golden glove keeping the most clean sheets in La Liga last season.

The Brazilian became the most expensive goalkeeper in the world when he moved to the Premier League in 2017. Manchester City desperately needed a replacement for Joe Hart who had left the club as a free agent. Ederson Moraes was on their radar and they finally paid £34.7m in 2017 to bring him to the Etihad Stadium.

In his first season with Manchester City, The Brazilian was able to help Manchester City win the Premier League title. Ederson has kept 62 clean sheets in 131 appearances, helping the club to back-to-back Premier League titles and a domestic treble in the 2018/19 season. The Brazilian international is also renown for his skills with the ball at his feet.

In an era when there has been tough competition from Iker Casillas, Petr Cech and others, Buffon will likely be remembered as the greatest goalkeeper of his time. The Italian legend is arguably one of the best and most consistent goalkeepers of our generation. Buffon’s move from Parma to Juventus in 2001 made him the most expensive goalkeeper of the time.

The Italian goalkeeper has been loyal to Juventus since his arrival in 2001. He even stuck with the club when they were relegated to Serie B division in 2006. One of the most loyal footballers of our generation. The Italian legend held top spot in the list of the most expensive goalkeepers in the world for 17 successive years.

Gianluigi Buffon has won numerous Serie A titles with Juventus but he is yet to win a Champions League title with Juventus. But nonetheless, the Italian living legend is a joy to watch and his passion for football remains the same even at 42 years of age.

At 24 years of age, Jordan Pickford made the debut for Sunderland’s first team, and only after one season with Sunderland’s first team, Pickford was transferred to Everton for a fee of around £25million. Pickford became the most expensive goalkeeper signings for Everton. The English international has not won any major trophy with Everton but he’s still a decent goalkeeper and one of the best goalkeepers in the Premier League.

Pickford’s transfer from Sunderland to Everton in 2017 made him the most expensive goalkeeper in Premier League at that time. But it seems like the price tag was too much for an English goalkeeper at the time.

Everton is at the 2nd position in this season’s Premier League table and looks to be very strong title-contenders. The question that exists now is if they can remain consistent for the rest of the season. Jordan Pickford definitely have to prove himself this season and help his side get back to their long-lost English glory.

Manuel Neuer is one of the most consistent goalkeepers of our generation. The German international has been the first-choice goalkeeper for the national team as well as club side for many years now. The consistent performances earned him many contract extensions at Bayern Munich. Neuer is definitely among the most expensive goalkeepers all time.

In his 10 seasons with Bayern Munich, Manuel Neuer has won eight Bundesliga titles and two Champions League trophies. The German international has also won a FIFA World Cup in 2014. The trophy cabinet of Manuel Neuer is too big and it shows us how successful he has been in recent years. The £21million move from Schalke to Bayern Munich seems like a bargain now considering the number of trophies he has won and the number of clean sheets he has kept.

Having recently won the treble with Bayern Munich last season. Manuel Neuer has to be one of the most valuable goalkeepers in the world.

Bernd Leno is among the most expensive goalkeepers in the Premier League. The German international made more than 230 appearances for Bayer Leverkusen’s side before he was transferred to Arsenal in 2018. He has only earned 6 caps for the German national team.

Leno has since been Arsenal’s undisputed first-choice goalkeeper, keeping 17 clean sheets in his 66 appearances in all competitions. Arsenal failed to win any major trophies with Leno at the back, but they were able to secure some important domestic titles like FA Cup and Community Shield titles.

It is safe to assume that Bernd Leno is going to be Arsenal’s first-choice goalkeeper this season as well. The German international is one of the most expensive goalkeepers in the world.

David de Gea is at number 9 in the list of the most expensive goalkeepers in football and he is also among the most expensive goalkeepers in the Premier League. The Spaniard’s transfer from Atletico Madrid to Manchester United in 2011 looked to be ironic having made high-profile errors in the past. But David de Gea soon adjusted to the Premier League atmosphere and became Manchester United’s first-choice goalkeeper in no time.

Since David de Gea’s arrival at Old Trafford, he has been a solid figure at the back and is considered as one of the pivotal players of the Red Devil’s squad. The Spaniard has also won Manchester United’s player of the season for three successive years.

Ever since the transfer of de Gea, Manchester United have won the Premier League title, FA Cup, League Cup, and Europa League. David de Gea also replaced Iker Casillas with Spain’s national side. The Spanish international is among the list of top ten most expensive goalkeepers in the world.

Toldo spent a total of eight years with Inter Milan. The Italian international helped Inter win five straight Italian Serie A titles from 2005 to 2010. He was also able to make 28 appearances for his national side but he was benched by Gianluigi Buffon for the most part of his international career. Read more interesting articles at thefootballlovers.com