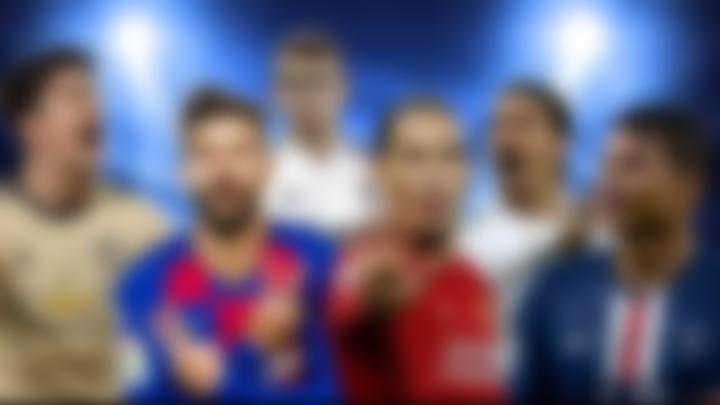 Football is not always about scoring lots and lots of goals but there’s another aspect of it which is called the “art of defending”. The main objective of a defender is to strike the initial break at the opponent’s counterattack. The defender also prevents an attacker to get in their box and stops them from scoring the goal.

Jerome Boateng won the treble with Bayern Munich in 2020 – including the Champions League, The Bundesliga, and the German Super Cup. Although injured for most part of the year, the German talented center back played his role in his club’s success.

One of the best defenders of the decade, Diego Godin currently plays for Italian Serie A side Cagliari. He joined Cagliari in 2020’s summer transfer window from Inter Milan. Godin also plays for Uruguay national team. He started his career in 2003 with Cerro and then moved to Villarreal in Spain before joining Atletico Madrid in 2010.

Diego Godin’s career excelled during his time at Atletico Madrid. In 2018, his strong presence at the back helped Atletico to win the UEFA Europa league. Godin also won La Liga’s best defender award in 2016.

The German international, Mats Hummels started his career with Bayern Munich’s youth academy. Hummels currently plays as a central defender for Borussia Dortmund, as well as the German national team.

David Luiz currently plays for Arsenal in the Premier League as well as for the Brazil national team. Luiz joined Chelsea in 2016 before moving to Arsenal in 2019.

One of the best central defenders of this decade, Gerard Pique currently plays for Barcelona and the Spanish national team. The Spanish international joined Barcelona in 2008 and has been an integral part of the Barcelona Squad since then.

Pique helped Spain to win its first World Cup ever in 2010. He also won the Champions League in 2015 with Barcelona. Pique won La Liga in 2019 and was named Footballer of the year in Catalonia in 2019.

Raphael Varane has been considered as a generational talent in the club football. He currently plays for Real Madrid and the French national team. Varane joined Real Madrid in 2011 from Lens youth academy and has been an integral part of Madrid squad since then.

One of the best and consistent central defenders of this decade, Giorgio Chiellini plays for Italian Serie A side Juventus. He also plays for the Italian national side. He joined Juventus in 2005 from AS Roma and has been an integral part of their squad ever since. He also captains the Italy national team.

He helped Juventus to reach two UEFA Champions League finals. Besides, he has won 8 straight Serie A titles with Juventus. Chiellini has also won the Serie A defender of the season award for 3 years till now.

One of the most consistent defenders of the decade, Thiago Silva currently plays for Chelsea after moving from PSG this year as a free agent. His career may not be at its peak right now but he used to be an integral part of PSG squad in Ligue 1.

Thiago Silva helped PSG reach the UEFA Champions League final in 2020. He has also lead PSG to win 8 straight Ligue 1 titles. With Brazil, he won the FIFA Confederations Cup in 2013 as well as reached the World Cup semi-final. Thiago Silva is easily one of top 10 football defenders 2020.

One of the highest-paid footballer and one of the best defenders of this decade, Sergio Ramos needs no introduction. He currently captains Real Madrid and the Spanish national team. Ramos joined Real Madrid in 2005 and has been an important part of the squad since then.

Sergio Ramos is easily one of top 10 defenders in soccer of all time.