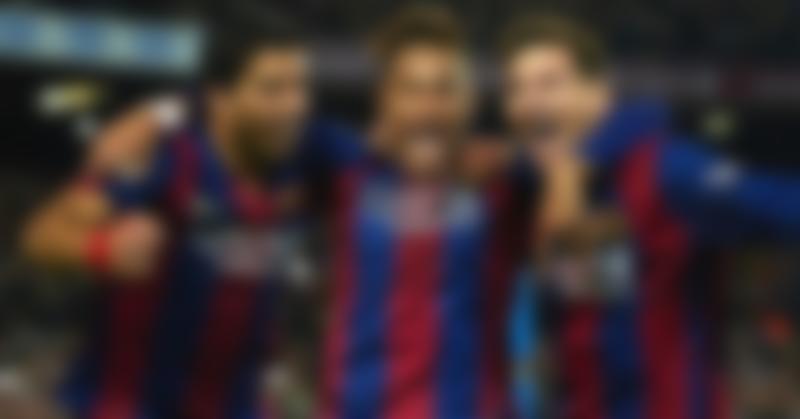 We have seen some great attacking and some of the best football trios of all time. The history of football is filled with so many great duos and trios but we will only rank some of the iconic football trios that actually changed the sport.

The idea of a dynamic front-three to tear down the defenses has been tested on several occasions in football and has, more often than not, succeed to a great degree. In the world of football, the best players have always been surrounded by world-class scintillating players who have had the quality abilities to provide them with the help they need to get on top of their game. The likes of Leo Messi, Cristiano Ronaldo, Pele, Maradona, Johan Cruyff, and Mo Salah have often linked themselves with iconic world-class players capable of going toe-to-toe with their out-of-the-world attributes.

So, without further ado, let’s take a look at the top ten best football trios ever.

At number 10 in the list of top 10 best football trios of all time, we have Manchester United’s David Beckham, Paul Scholes, and Ryan Giggs. These three athletes are legends and icons of the football world and an inspiration to many young football players. These three were the hardest-working players of Manchester United and proved their abilities time after time. The midfield of Paul Scholes and Ryan Giggs is considered as one of the greatest midfield duos ever. Paul Scholes was arguably the best passer of the ball the great country of England has ever produced.

The trio used to create chances for the strikers from the midfield and also used to score goals themselves. David Beckham was the more prolific goal scorer among the trio because of his abilities to go forward and abilities to score long-range free-kicks. David Beckham is also considered one of the best free-kick takers of all-time. Giggs and Beckham were natural wingers with contrasting styles. Both hard-working, although David Beckham was considered the hardest-working midfielder in terms of stamina and ground coverage despite lacking Giggs’ blistering pace and dribbling ability. Beckham was also the finest crosser and dead-ball expert the world has ever seen.

The trio pretty much won it all together. From multiple Premier League titles and a Champions League titles, the trio of David Beckham, Paul Scholes, and Ryan Giggs will always be remembered as one of the iconic football trios.

The old lady of Juventus is one of the best football teams and one of the oldest football clubs in our history. They have had numerous great football trios but Omar Sivori, John Charles, and Giampiero Boniperti top them all. With John Charles’ presence in the penalty area and Omar Sivori’s magic, Giampiero Boniperti finally had the support he needed to make Juventus a European powerhouse.

The trio led the Old Lady to three Serie A titles and two Italian Cups in four seasons. Juventus have seen some of the best attacking trios of all time but but continue to consider this particular trio as the best in their history.

This is another legendary Juventus trio but this time it’s a defensive trio that made a formidable wall – a wall that was near impossible to get past. The defensive trio of Bonucci, Barzagli, and Chiellini is also known as BBC2 and the trio is among the greatest football trios of all time. Together with their legendary goalkeeper Gianluigi Buffon, Juventus are on the verge of becoming the European powerhouse.

In Serie A though, the defensive trio of BBC2 acted as a colossus and it was near impossible for other Serie A sides to breach the wall. The Old Lady went on to win six consecutive Serie A trophies and reached two UEFA Champions League finals. The trio of Leonardo Bonucci, Andrea Barzagli, and Giorgio Chiellini is arguably one of the greatest defensive trio in the history of football and they are also among the best soccer trios of all time.

Barcelona has seen some of the football’s greatest talents and deadly duos and the trio of Messi, Eto’o, and Henry is one of those legendary trios. The trio accelerated an era-defining Barcelona team to a treble in Pep Guardiola’s first season in charge.

Lionel Messi was just starting to appear on the football scene as a star of a player as he was only 21 years old in 2008. Partnered with the legendary French superstar Thierry Henry, and Samuel Eto’o, Leo Messi furnished his play-style and it benefited the Spanish side. This deadly attacking trio helped Barcelona claim their European legacy and the Blaugrana was back to where they always belonged.

The attacking trio helped Barcelona win the treble in 2008 including the La Liga, the UEFA Champions League, and the Spanish Cup in one season only. Barcelona’s iconic trio of Lionel Messi, Samuel Eto’o, and Thierry Henry is arguably one of the best attacking football trios.

Liverpool’s attacking trio of Salah, Mane, and Firmino is also known as MSF and they are considered as one of the best attacking football trios of modern football. This deadly trio helped Liverpool get back to their glory and now they are back to the very top in English football. Even in 2020, Mohamed Salah, Roberto Firmino, and Sadio Mane are still rocking as hard as ever, and are considered as best football trios 2020. Liverpool fans are enjoying the time of their lives, as they are witnessing something special under the boss Jurgen Klopp, and the deadly attacking trio of Mo Salah, Roberto Firmino, and Sadio Mane.

The iconic trio of MSF has scored 250 goals together in 4 seasons only which is ridiculous, to say the least. They have the ability to shake any defense and they can break teams in a matter of minutes. The trio of Mane, Salah, and Firmino has helped Liverpool win the Champions League trophy, the Premier League title, FIFA Club World Cup, and UEFA Super Cup. Jurgen Klopp’s attacking trio has brought Liverpool back to the promised land.

Just like Manchester United’s legendary midfield trio of Beckham, Giggs, and Scholes, Barcelona also had an iconic midfield duo of Xavi, Iniesta, and Busquets. This trio was the heart of Pep Guardiola’s iconic Barcelona side that won the treble in 2008, and the Champions League in 2015. At their prime, the midfield of Xavi, Iniesta, and Busquests was so dynamic and creative it was the driving force behind the Barcelona attack. The great vision and passing abilities of these three individuals laid bases for the legendary tiki-taka philosophy which was admired by the whole world.

The trio helped Barcelona win lots of trophies including La-Liga, Copa Del Ray, Champions League, and Club World Cup. Together they won four UEFA Champions League trophies and six La Liga titles. Xavi and Iniesta were the only midfielders in the top 3 of the Balon d’Or list for 2 or more times. Andreas Iniesta has also scored a World Cup-winning goal in 2010 and helped Spain national team win their first FIFA world cup ever. The midfield trio of Xavi, Andreas Iniesta, and Sergio Busquests is arguably the best midfield trio the world has ever seen. Opinions may differ.

At number 4 in the list of best football trios of all time, we have the 3R’s of Brazil. This legendary and iconic trio needs no introduction. I’m pretty sure this trio was among our favorites growing up. The three Brazilian superstars made football look like a walk in the part as they dribbled their way past the best defenses of their era and took Brazil to World Cup glory. The trio won the World Cup in 2002 and showed the world how dangerous Brazil’s team can really be, especially with Rivaldo, Ronaldo, and Ronaldinho.

The feared attacking Brazilian trio scored 15 goals in only seven games in the Selecao’s successful World Cup campaign. Rivaldo, Ronaldo, and Ronaldinho also won the Copa America in 1999, with the trio scoring 11 goals in 6 six games to win the trophy. Each of the three Brazilian superstars was greatest in their positions. Ronaldo was a great striker and a finisher, while Rivaldo and Ronaldinho were dazzling midfielders and with their vision, they created so many chances for the strikers. Besides chance creation, both Rivaldo and Ronaldinho were inspirational free-kick takers.

Real Madrid needed something to go head-to-head with their Spanish rivals Barcelona and the trio of ‘BBC’ came to the fore at just the right time. Karim Benzema, Cristiano Ronaldo, and Gareth Bale played their part in taking Spanish football to impressive new heights. Ronaldo and Benzema were brought to the Spanish capital in order to regain the former European and Spanish glory which they lost a while ago. The arrival of Gareth Bale ignited the spark Real Madrid was missing and then the time came for the Los Blancos where they took over the football world.

The fans of Real Madrid saw some of the magical football during the era of “BBC”. The trio scored an incredible 97 goals in their first season together in 2014 and won four UEFA Champions League titles over a span of four years. The trio also helped the Los Blancos to win two Copa del Ray trophies. Under the deadly trio of Benzema, Ronaldo, and Bale, Real Madrid became the first club in the history of football to win three consecutive Champions League titles. At their best, the trio was unstoppable to play and they are among the best football trios of all time.

Barcelona’s deadly attacking trio of Leo Messi, Luis Suarez, and Neymar is also famously known as “MSN” and they were arguably the best football attacking trio of their time. They may have broken up now, with Neymar joining PSG, and Suarez joining Atletico Madrid, but the legend of the MSN partnership will live on.

Lionel Messi, Neymar, and Luis Suarez scored 122 goals in a single season and formed one of the deadliest partnerships in football history. The following season, the trio of MSN broke their own record when they scored 131 goals together and helped Barcelona win another La Liga title. With the brilliant Brazilian Neymar lining up in attack alongside Lionel Messi and Luis Suarez, Barcelona won the Champions League, Club World Cup, and La Liga (twice), tearing up the defenses with their impressive pace, skill, and sheer talent.

The iconic trio of van Basten, Gullit, and Rijkaard is an example of how good signings can improve a team and change the tides of a club. van Basten, Gullit, and Rijkaard’s trio are at number 1 in the rankings of the best football trios of all time. During his time, van Basten was one of the most clinical finishers in the game. Rijkaard was arguably the best defensive midfielder of his time while Gullit was Netherland’s number 10. These three individuals having sheer talent and individual caliber formed the best football trio in history of football.

With the help of this trio, AC Milan went on to win three Serie A titles, two UEFA Champions League trophies, and two European Super cups. This trio also helped AC Milan gain a 58 matches unbeaten streak in all competitions.

And that concludes our list of the top ten best football trios of all time. Which soccer trio is your favorite and why do you like them the most? Let us know in the comments down below!