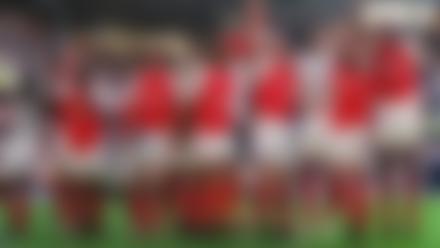 No matter if you are winning or losing, there’s always a chance to turn things around. “Keep going until the final whistle” is an old football saying that makes sense in theory, but is hard to do when you’re 4-0 OR 5-0 down. “It only takes a second to score a goal” because one goal can change the whole scenario of the match.

Arsenal FC has seen a fair share of come-backs and at one point they made it a habit of coming back from the dead. The London club has seen some iconic comebacks in the Wenger era and post-Wenger era as well. But most of the comebacks for Arsenal happened during the Arsene Wenger era. Now without further ado, let’s take a look at the top 10 Arsenal comebacks.

Arsenal comeback vs Reading has to be Arsenal greatest comeback ever. When we talk about the competition, it may not be as popular as other competitions like Champions League, but this game produced a wild result and produce edge-of-the-seat stuff for the neutrals.

Reading was coming as underdogs and no one expected them to put on a show in the Capital One Cup. Reading played magnificently for 44 and a half minutes, putting Arsenal to the sword and going 4-0 up in this 2012 League Cup tie. Going 4-0 up in the first half of the game, against a strong Arsenal side was unbelievable and ridiculous, to say the least. The home side huddled in celebration, could hardly stifle their laughter. Arsenal was sometimes guilty of underestimating lesser opponents like Reading or expecting to waltz through games unchallenged, but it was never supposed to be this easy.

“Reading are running riot,” Sky Sports commentator Rob Hawthorne called out in astonishment. “Arsenal are being annihilated!”. And in all honesty, yes they are being annihilated. They were being embarrassed by Reading. The fourth was a wake up call for Arsenal and they responded when Theo Walcott goal on the stroke of half time proved the turning point. In the 88th minute of the game, Olivier Giroud made it 4-2, but with 2 minutes to play, it was still Reading’s game.

Arsenal scored an 89th minute goal and a goal in the 5th minute of injury time took it to extra time. The score line was looking ridiculous. 4-4! In the extra time, Arsenal finally took the lead for the first time and made it 5-4 but minutes later, Reading equalized again to make it 5-5! This game was getting out of hand and it was becoming a roller coaster ride for the fans.

In the very last minute of the extra time, Reading gave away two unnecessary goals and Arsenal pounced upon them to make the final score Reading 5-7 Arsenal. Phenomenal, Edge of seat stuff! What a roller coaster ride and even special for the neutral fans.

Twelve-goal thrillers aren’t nearly as commonplace as we’d each love for them to be, and there’s a good chance we’ll never be blessed with another game quite like this. The least we can do is treasure it, preserved in all its bewildering, bantery glory. This match has to be at number 1 in the list of Arsenal greatest comebacks.

Reading manager Brian McDermott was asked if he’d watch the DVD of this extraordinary match, he replied “No, I’ll probably throw it in the bin.”

This is one of Arsenal’s classic Champions League comeback where they were facing the difficult task of battling the mighty Barcelona. Barcelona line-up was full of star players including Lionel Messi, Andreas Iniesta, Xavi, David Villa, etc. There were very few neutrals who gave Arsenal a chance to win but most people just wrote them off. But Arsenal did the impossible and this match has to be one of Arsenal best comebacks.

Barcelona started the first half with a storm, putting balls from left to right and attacking Arsenal’s goal after every few minutes. Chances were going towards Barcelona and the Catalans finally took the lead when Lionel Messi passed a stunning through ball to David Villa, who finished the goal clinically.

Could Arsène Wenger roll back the years and inspire his youthful side to produce one of the memorable European nights in the club’s history? Many (understandably, it must be said) were unable to imagine achieving such a feat. And yet…

Arsenal trailed for the most part of the 90 minutes. But in the second half of the game, The North London side decided to ride Barcelona’s storm. This time, it was Arsenal’s storm as they were dominating Barcelona, putting balls from left to right and attacking Barcelona’s goal. Arsenal’s efforts were rewarded as Robin van Persie struck an equalizer in the 78th minute. The emirates stadium erupted into a sea of Red & White shirts, chanting and forcing their team towards a famous comeback against a star-studded line-up of Barcelona.

Five minutes later after the equalizer, the substitute Andrey Arshavin scored an astonishing goal to make it 2-1 to Arsenal, and the comeback was once and truly completed. Mission impossible had been accomplished. The goal by Arshavin was an example of classic Arsenal counter-attacks. The result on the night, the performance, and the dramatic manner in which the contest unfolded marks this game as one of the greatest moments in Arsenal’s recent history. One of Arsenal greatest comebacks in the Champions League.

The North London derby of Tottenham vs Arsenal is always an interesting game to match. During the early season of 1962/1963, Arsenal took on Tottenham but it seemed like it’s going to Tottenham who would come on top since they had a very strong side. But you just can not write off Arsenal as they have the capability to overcome any deficit.

The match started and in the first half of the game, Tottenham scored 3 goals in the space of only 26 minutes. And just like that, the game was pretty much over for Arsenal. Tottenham looked to be cruising and they were totally dominating their city rivals. The score would have been more than just 3-0 had Tottenham capitalized the easy chances they were getting.

But in just his third appearance for the club, Arsenal’s 18-year old assistant head of youth development, David Court, would score twice before halftime to make it 3-2.

In the second half of the game, Tottenham Spurs would jump out to a two-goal lead again, but scrappy Arsenal would again fight back, scoring twice to make the final score at White Hart Lane 4-4.

This match is still regarded as Arsenal famous comeback, back in the days.

Facing Brussels-based Anderlecht, the Gunners fell down 3-1 after the first leg in Belgium. Six days later on the return leg at Highbury, goals from Eddie Kelly and John Radford evened the aggregate at 3-3.

Just one minute later in the 76th, a Jon Sammels score would complete the dramatic comeback and win Arsenal their first European trophy. This comeback win over Anderlecht is regarded as one of Arsenal FC best comebacks in the club’s history books.

Arsenal’s 2002/2003 Champions League campaign did not start as planned and they were on the verge of losing the group stages of UCL. In the first match of the season, Arsenal lost 3-0 to Inter in their own home and the two sides met again at San Siro.. It was a do-or-die situation for Arsenal and they had to beat Inter in order to stay alive in the competition. Arsenal’s loss looked imminent as they had not won an away match in the Champions League for more than a year.

The Gunners’ only hope was in Thierry Henry. Even the commentators said, “You’ve always got a chance when you’ve got Thierry Henry on your team!” Thierry Henry can win you matches, and boy did he deliver. Henry Arsenal comeback goal would become the basis for the comeback. The striker opened the scoring in the 25th minute of the game. The French legend would go on to score again and provide the assist for three more Arsenal goals, securing The Invincibles a shocking 5-1 away win that would play a big part in helping them through to the knockout stage of the competition. This comeback victory is still one of Arsenal greatest comebacks.

Arsenal was still very much in contention for the Barclays Premier League title and a Champions League spot when they decided to go on a five-game winless streak in the final stretch of the 2007/08 season. If they wanted to keep their title hopes alive they would need to win at Bolton, something they hadn’t done since 2002. But down 2-0 and to ten men at halftime, it looked like “there’s always next year” was going to be the excuse yet again in North London.

Hope emerged in the second half when William Gallas scored off a corner. The Hope turned into belief when Robin van Persie converted a penalty to level the game at 2-2. But a tie wasn’t enough for the Gunners. In the stoppage time of the game, Arsenal forced Bolton to make an error and they ended up scoring an own goal which would make the final result Bolton 2-3 Arsenal.

Still, Arsenal ended up at the third spot in the Premier League table, but this comeback victory made the league a little more interesting at the time. Still to the day, this game is considered among Arsenal best comebacks.