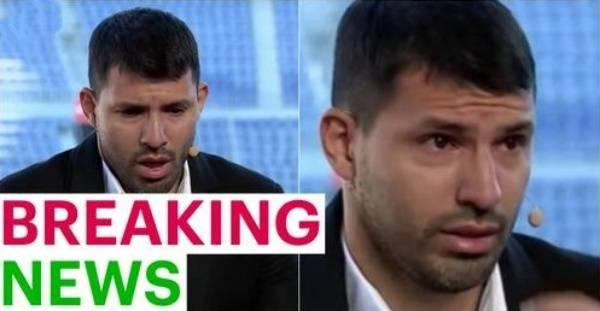 Sergio Aguero sobbed uncontrollably as he admitted he had been forced to retire by a heart condition, at the Camp Nou on Wednesday. Aguero admitted hearing the news that his career was over-aged 33 was hard to take.

During the presentation, there was a video of his greatest goals, as well as Aguero admitting that his league-winning strike for Manchester City is one of the best moments of his career. Then, his former manager Guardiola and current Barcelona coach Xavi joined Aguero on the stage in front of the Camp Nou pitch.

Asked for the best moments of his career he spoke first of a famous goal he had scored for Independiente in Argentina against Racing when he was just 16, and then of helping Atletico Madrid secure the Europa League against Fulham in 2010.

There were also mentions for his part in winning the Copa America this year alongside Lionel Messi who he believed he was teaming up with when he moved to Barcelona only for Messi to move to Paris Saint Germain. And his last ever goal: for Barcelona against Real Madrid.

“It’s not bad for that to be the last goal,” he said beaming, now recovered from the first difficult moments when he had to fight back the tears.

“I’m glad to be here telling the story,’ he said when asked about the relief that his heart problem had no greater immediate consequence than him having to go for tests on his heart.”

“When they did the first tests they told me there was a real chance I would not play again. And when they later told me it was definitive it,” he added.

Asked if it made it easier knowing that the problem had forced him to retire at the end of his career and not at the start he said: “Yes it’s better that way and I’m very happy for the career I’ve had.”

“This press conference is to announce that I have decided to stop playing professional football,” Sergio Aguero said right at the start of his speech confirming there was no return possible.

“This is a hard moment for me but my health has to come first. I did everything possible to see if there was any hope but there wasn’t. I am very proud of my career. I always wanted to play football from five-years-old. Atletico put their faith in me when I was only 18. And then I went to City and everyone knows what that club means to me.”

“Then I got the call from Barcelona and they have treated me well. I did the best I could to help Barcelona. I leave with my head held high. I don’t know what is waiting for me but it will be a different life for sure.”