Being a son of one of the best footballers to grace the planet, it is likely that Cristiano Ronaldo Junior will inherit a lot of his father’s fan base. After all, his father is probably the most popular footballer on the planet right now. But, Ronaldo Junior certainly has an identity of his own, which we will try to discuss.

Who is Ronaldo Junior?

Ronaldo Junior is the first child of Cristiano Ronaldo. His full name is Cristiano Ronaldo Jr. He is nicknamed as Cristianinho. Ronaldo Jr was born on June 17, 2010, in San Diego, California, United States. As of 2020 Ronaldo Jr is 10 years old. Ronaldo Jr has a height of 4 feet and 1 inch. Upon the birth of his son, Ronaldo broke the news by saying:

“It is with great joy and emotion that I inform I have recently become a father to a baby boy.”

“As agreed with the baby’s mother, who prefers to have her identity kept confidential, my son will be under my exclusive guardianship.

Who is Ronaldo Jr’s mother?

The mother of Ronaldo Jr remains a mystery to this date. It is believed that Ronaldo had an agreement with Jr’s mother to never disclose her name in the public. There is a lot of speculation as to who his mother is.

The Portuguese dated Russian supermodel Irina Shayk at that time but it was confirmed that she was not the mother of Junior. There are rumours that Jr’s mother is an American waitress who was involved in a one-night stand with Ronaldo during his time in the United States.

After her pregnancy, she got in contact with Ronaldo via his agent Jorge Mendes to confirm that the child was Ronaldo’s and they performed a DNA test to confirm it. It was also rumoured that Ronaldo paid 10 million pounds to gain full custody of his son and to keep her identity a secret.

We can, therefore, confirm that Ronaldo Junior is not adapted.

Well, for Ronaldo he alone is good enough to parent his first son. When asked in interview Ronaldo said he will tell his son about his mother when he is old enough to know. “When [my son] is grown up I will tell him what I did, what I felt, everything that went through my mind.

“Some children never get to know their parents, neither mother nor father. Having a father is enough. In case Jr feels the need for a mother, his grandmother Dolores is always ready to fulfil his need.”

The news is not confirmed as of today. However, according to Elma, Rolando’s sister, they told Ronaldo Jr that his mother is dead.

“Once we told him she was in Heaven, but my brother and mum asked us not to repeat it. We say now his mum went travelling. He goes silent, forgets about it and doesn’t ask any more.” she said in 2014.

She also insisted that Ronaldo Jr will be free to pursue the identity of his mother if he wants to. “If later on Cristianinho wants to know who his biological mum is, it will be his decision and no one’s going to stop it.”

Another Ronaldo sister, Katia Aveiro has also said in the past that Jr’s mother is dead. “There is no woman calling him. There is no mother, no telephone calls, nothing. His mother died. The baby doesn’t have a mother,” she said.

Ronaldo Jr was born in the United States. He could go on to represent the US national team if he is successful in his footballing career. But he may as well choose to represent Portugal.

Ronaldo Jr met his father arch-rival Messi at the 2012 Ballon d’Or awards ceremony for the first time. While meeting Messi at the FIFA Best award bash, Ronaldo said to Messi: “He watches a video on the internet of all of us and he talks about you.” Seems like Ronaldo Jr is a fan of Lionel Messi.

Since the past decade has been dominated by the question of whether Ronaldo or Messi is a better footballer. Ronaldo vs Messi is the best argued upon topic since these two footballers made their name known to world football.

Because of the intensity of the rivalry between Ronaldo and Messi fans, they tend to extend the conversation between their sons too. However, even though the kids might be involved in football from a very early age, it is too early to make any comparisons between them. Hopefully, both of them will have a successful career like their fathers.

Being the son of a celebrity surely has a lot of perks. When Ronaldo Jr joined Instagram, he almost reached 1 million followers within 24 hours. But that account has since been deleted.

Ronaldo Jr surely has inherited his father’s passion for football and fitness. While Jr is too small to have abs like his father, he does imitate his father’s style really well. We can see from Ronaldo’s Instagram posts  Ronaldo Jr training with his father.

Ronaldo once posted a picture of Jr mimicking his father’s trademark celebration with a caption: “Jr say daddy I’m gonna be like you! What do you think?”

While it is not only in regard to his father’s celebration style that Jr wants to copy him. He wants to match by winning a Ballon d’Or. 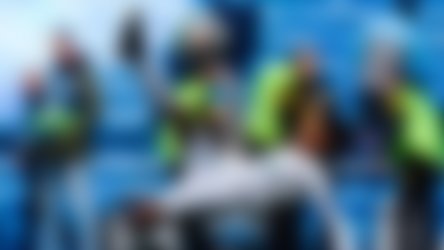 After winning his fifth Ballon d’Or, Ronaldo said:
“I see a bit of myself in [Cristiano Ronaldo Junior], and not only because he’s my son. He told me he will be better than me. He tells me he will win a Ballon d’Or and that he can win five.”

Ronaldo speaking after his move to Juventus expressed his desire to see his son grow up to become a footballer.

“Cristiano Jr. is very competitive, he’s like me when I was young. He doesn’t like to lose and he will be like me, I’m sure, 100 per cent.”

Cristiano Ronaldo voiced his support for Ronaldo Jr to become a football player and would also teach him skills. In an interview, he said: “I like to teach him some stuff, but he’s going to be whatever he wants and I’m always going to support him. But of course, I want Cristiano to be a football player because I think he has that drive. He has a good body, he’s fast, he has skills, he shoots good.”

On his debut, Ronaldo Junior showed his goalscoring skills of his father by scoring four goals. He played alongside Andrea Barzagli’s son Mattia and Claudio Marchisio’s son David. In one game against CS Maritimo, he scored seven goals within one half. A record that even his father would be proud of.

As of October 31, 2019, Ronaldo Jr scored 58 goals and provided 18 assists. While Ronaldo could only manage to find the net 34 times during the same period.

Ronaldo on Jr’s form at Juventus

Ronaldo has said that his son “is fast, has skills and shoots well”, traits that a young Ronaldo had when breaking into the Sporting team. Speaking about his son’s quick adaptation to Juventus, Ronaldo said that it is easier for his son to play as he does at the youth level. He also admitted that his son will find it difficult to match his feats.

“He is playing for Juventus and adapting really well,” the Portugal international told DAZN. “It has been easier for him than for me.”

“I hope that [he] can be like his dad. He says he is going to be better, but I think it’s difficult.”

Becoming better than Ronaldo is not just a difficult feat; it is almost impossible. After all, Junior’s father is one of the best goalscorers that the world has ever seen. He has won everything there is to be won, not just one but a number of times. Jr’s father is a record-setter and only Lionel Messi can be considered as his true rival in terms of the stats and trophies that they have won.

While Ronaldo Jr might not match his father, he seems to be on the right track to becoming a footballer, just like his father. And who knows, maybe he will set the standard in his own right.