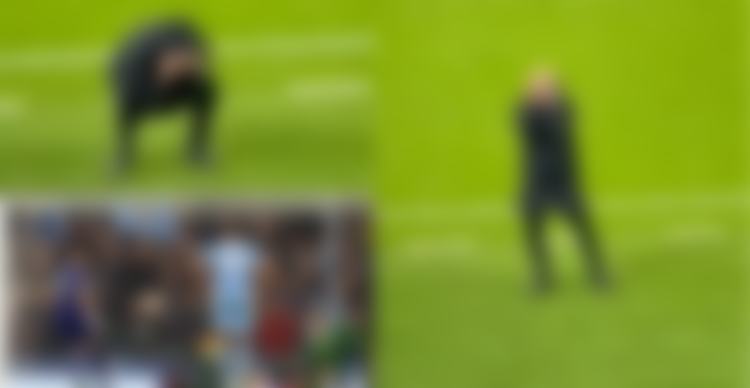 The Pep Guardiola Reaction That Went Viral- Manchester City and Real Madrid played arguably the most entertaining match of this season’s UEFA Champions League semi-finals first leg. At the home of the English champions, both sides went toe to toe, trading blows in the only way both the teams know how to: unleashing their attacking weapons to devastating effect. Manager Pep Guardiola was totally ready for the challenge from Carlo Ancelotti’s side.

While City ultimately came up victorious courtesy of a 4-3 win, Real Madrid is by no means dead and buried, after a game in which they gave a very good account of themselves, in spite of being battered and bruised on every opportunity that their opponents had the ball.

City manager Pep Guardiola is normally a very animated man on the sidelines, gesticulating wildly, always wearing his heart on his sleeve, telling his players to play the way they are supposed to, without any margin for error. He was absolutely over the moon when his team raced to a 2 goal lead, scything open the Madrid defence to shreds with surgical precision.

It felt like it was only a matter of time before City ran away with it. But just when it looked like City would ease away with the game, profligacy reared its ugly head, and City began to miss chances with alarming regularity, prompting some really angry gestures from Pep Guardiola, especially when Riyadh Mahrez missed a clear-cut chance, when it seemed that Foden was in a much better place to score.

The Reaction Of Pep Guardiola  To The Panenka Penalty Was Priceless

As the game progressed, Real got in the game, and the game see-Saeed back and forth, until the 4th goal, where it seemed like City finally could breathe with a cushion. But that was not to be, as out of nothing, Madrid was given a penalty, and up stepped Benzema. Noe Benzema had just come off a game where his penalty was saved. City keeper Ederson was well aware of the fact and must have surely studied his penalties, but even was not prepared for what happened next.

Benzema stepped up and calmly dispatched the penalty with the “Panenka”, and the entire stadium was in shock. While Carlo Ancelotti went for a moulder reaction of telling his players to calm down and keep their heads in the game, Pep could not quite believe what just happened.

After the penalty went in, Pep literally could not believe what he has seen. Call it shock, call it a warning bell, or grudging admiration towards the goal, but his reaction meant that this was a man who just cannot seem to miss this point in time. The crouch. The head grab. the facial expressions. All this points out to a manager who knows that until Benzema is in the opposition, and until he is on the pitch, neither the game is over, nor his team is out of the woods. Because the maverick Frenchman always finds a way.