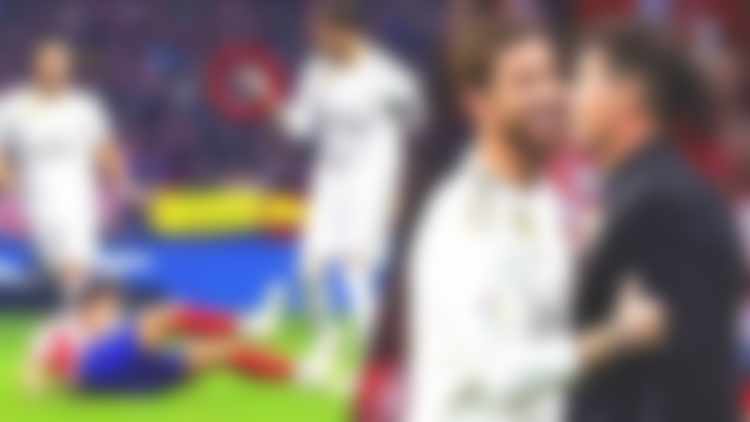 Across all sports, there are unspoken rules about the ways that athletes are expected to act. A lot of this is how you behave towards the opposition, and it is expected that you show them respect and also respect the sport. We all applaud sportsmanship and it can be wonderful to see it in action. Similarly, in football, respect and sportsmanship is of upmost importance. However, as much as we hate it, there has always been a dirty side of football.

Football is the beautiful game. It brings people and nations together, but it’s not quite always a beautiful game. Sometimes, someone stoops a level below what is expected of them, breaking the rules, showing disrespect. Sometimes even top class players show disrespect towards each other.

TheFootballLovers have compiled a list of the top 10 most disrespectful moments in football:

10. Fabricio Shows Middle Finger To His Own Fans

Ranking 10th in our list of the top 10 most disrespectful moments in football is the Brazilian payer Fabricio flipping his own fans off. The incident came in the Gaucho League match against Ypiringa, as Fabricio reacted to taunting from the crowd by flicking the middle finger of each hand repeatedly towards fans. That is not a good way to deal with criticism at all, especially to the fans that help make this sport as great as it is.

Internacional fans at Wednesday night’s match were seen celebrating the sending-off, before Fabricio wrestled with team-mates, tore off his shirt, and marched bare-chested across the pitch to the players’ tunnel, gesticulating to the supporters.

“It’s an unfortunate attitude. Fabricio was hot-headed,” said Internacional president Vitorio Piffero “We will not take action now, only after Easter. He is suspended until then.”

9. Robertson Slaps Messi On The Back Of His Head

During a very intense UEFA Champions League clash between Liverpool and Barcelona, the tensions were high. Liverpool were on the verge of one of the most famous comebacks of all time. During the game, Messi was on the ground and Andy Robertson came from behind to slap him. This all happened out of the sight of the referee.

After the match, Robertson received major backlash from the fans for disrespecting one of the legends of the game. Thus, this event is 9th in our list of top 10 most disrespectful moments in football.

One of the most disrespectful moments in football happened when a pitch invader punched Aston Villa’s Jack Grealish during the derby game at Birmingham. The incident occurred in the 10th minute of the match at St Andrew’s, with Grealish running away with his back to the assailant at the time.

Local rivalries are what make the sport interesting. However, the football field is only for players, and the safety of the players is of utmost importance. This act has to be one of the most shameful moments in football.

7. Kepa Refuses To Be Substituted

One of the most disrespectful football moments in football is when you do not follow the instructions of the coach. The same happened when Chelsea goalkeeper Kepa Arrizabalaga resisted manager Maurizio Sarri’s attempt to substitute him in the Carabao Cup final against Manchester City.

The manager was furious with the goalkeeper. Sarri wanted to bring on reserve keeper Willy Caballero in place of the world’s most expensive goalkeeper ahead of a penalty shootout. However, Kepa refused to be subbed off. To add salt to the wound, Chelsea lost the penalty shootout.

Luis Suárez is widely known as one of the most disrespectful football players. During the World Cup 2010, he took it upon himself to become the illegal goalkeeper and batted the ball out of the net with his arms in the final minutes of the game. Some Ghanaians, preparing to rejoice, were stopped cold as they saw their dreams potentially torn away. He destroyed the dreams of the African nation in what is one of the most shameful moments in football.

To make matters even worse, Asamoah Gyan smacked his penalty against the bar and was unable to capitalize on the penalty.

In what we can say is the most disrespectful goals in football, Paul Georges stooped to a new low. Instead of just passing the ball into an empty net, Ntep races towards the goal line before stopping the ball, stooping to his hands and knees and nudging it over with his head.

It was just a meaningless clash on the final day of the Ligue 1 season. The French striker could have just passed the ball into the net. But, he chose otherwise. He did not gain any supporters from this move.

Making it to the 4th spot on our list of the top 10 most disrespectful moments in football is Luis Suarez’s bites. One of the most lethal players in football, yet also one of the best in the world, Luis Suarez’s entire career has been shrouded in controversy.

An incident happened during his time at Liverpool in a match against Chelsea. Away from the ball, Suarez was seen tussling with Chelsea defender Branislav Ivanovic, who he then bit. It was not noticed by the officials at all. .

After the game, action was taken and Suarez was banned for 10 games and fined. It was not the first time he had bitten an opponent, nor would it be the last, as he also bit into Giorgio Chiellini’s shoulder during the 2014 World Cup.

At 3rd in the list of top 10 most disrespectful moments in football is the racist chants of the crowd towards Balotelli during a Serie A clash. The Italian striker threatened to walk off the pitch after he was the target of racist abuse during Brescia’s Serie A defeat by Hellas Verona.

The referee paused the game and began the anti-racism protocol after Brescia’s Balotelli picked up the ball early in the second half and kicked it into the crowd. A warning was also given that any abuse or disrespectful football chants would lead to the game being abandoned. The Serie A have been working hard to stop racist moments in football such as this one.

One of the most disrespectful football moments came when Zidane headbutted his opponent. In the final game of his career, the 2006 World Cup Final against Italy, French midfielder Zinedine Zidane tarnished his career with one hot-headed moment. He had been awarded the Golden Ball before the game and scored in the opening 10 minutes, but the game eventually went to extra time.

In the 110th minute, Zidane turned around and brutally headbutted Marco Materazzi in the chest after an exchange of words, seeing the Italian knocked to the turf. The referee correctly gave a straight red card, and France would eventually lose on penalties. It was later revealed that Materazzi had provoked Zidane with a comment about his sister. Zidane is now the current manager of Real Madrid, but is still remembered mainly for this moment of madness by millions of football fans.

On the top of our list of the top 10 most disrespectful moments in football is the tragic event of the referee getting brutally kicked by a player. Brazilian soccer player William Ribeiro was charged with attempted murder after he kicked referee Rodrigo Crivellaro in the head, knocking him unconscious.

The shocking events unfolded after Crivellaro awarded Guarani de Venancio Aires a free kick against Ribeiro’s São Paulo de Rio Grande team during the second half of their match.

What do you think of our list of the top 10 most disrespectful moments in football?