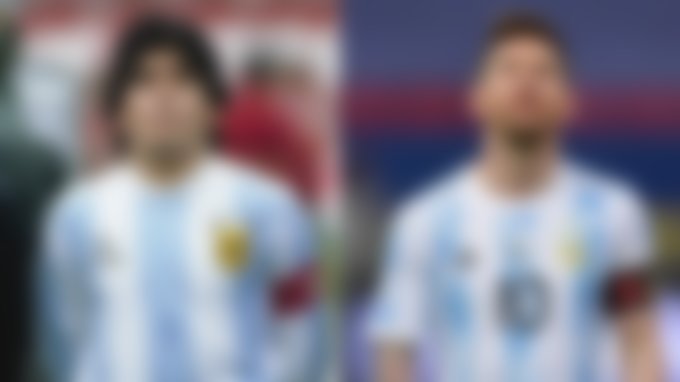 Lionel Messi is acknowledged widely as one of the greatest players of all time, with many arguing that he is, in fact, the greatest of all. However, names such as Cristiano Ronaldo, Pele and his compatriot, the late Diego Maradona, are also thrown into the mix.

Ronaldo and Messi both lack a FIFA World Cup victory, which would have a huge effect on either of their legacies if they were to lead their nations to victory in Qatar. Pele and Maradona are both World Cup winners, and the Argentinian firecracker captained his team to victory in 1986 in Mexico; a feat that, despite his brilliance, Messi has been unable to replicate ever since.

Lionel Messi and Cristiano Ronaldo have been through it all already 😅 pic.twitter.com/DR65R1vvd2

In terms of raw ability and goal contributions on the pitch, it is almost impossible to argue against Messi being the greatest footballer ever. But in the opinion of some, international success on the biggest stage of all is an absolute necessity to be the outright greatest of all time.

While Messi has won everything there is to win at the club level, Argentina fans may feel they have been short-changed by his inability to deliver a World Cup trophy back to Buenos Aires. But this year that could change. In the Canada World Cup odds, Argentina is one of the main favourites to lift the World Cup trophy in Qatar, offered at a price of +900.

Coincidentally, Canada is competing for just the second ever time, with their first coming in 1986 in the tournament in which Maradona led Argentina to victory, and perhaps that is a good omen looking forward to the remainder of the tournament.

However, Messi may wish to avoid the controversy that surrounded Maradona at the 1986 edition of the World Cup held in Mexico. With the reach of social media and the eyes of the world zoomed in on every moment of every game at the World Cup, Messi would certainly receive many critiques if he achieved victory for Argentina by manipulating the rules.

Although the Argentinian fans would certainly be grateful for the heroics, as it never stopped Maradona from being worshipped by fans from his home nation. Maradona’s club honours

Maradona may have a FIFA World Cup title to his name, in which he played a major part, but at the club level, his honours simply do not compare to Messi’s. He failed to win a league title in his time at Barcelona, and Messi managed to win a massive 10 titles with the Catalans. He did win a couple of Serie A titles with Napoli, but the peak of his European success was a UEFA Cup, and with Messi being a four-time UEFA Champions League winner, they are simply light years ahead in terms of their achievements at club level.

A World Cup win for Messi would certainly end any debate between the pair, but until that happens, the question has to be asked of just how important a World Cup win is and how much value it holds. For Argentina fans, it is understandable that a World Cup success has left them remembering Maradona more fondly than Messi for his European club achievements, but objectively does breaking numerous records, winning an abundance of league titles and becoming a champion of Europe several times eclipse a sole World Cup title?

Maradona’s edge in terms of how he is viewed by Argentinians is of course due to the fact that he delivered eternal glory for his country. Messi may be the much greater footballer and has certainly achieved much more in the game overall. While the question of who is the greater player may be obvious, legend status is much less objective, and Maradona has the sentiment of having made his country World Champions in the past, which may keep his legacy in Argentina ahead of Messi’s for the time being.