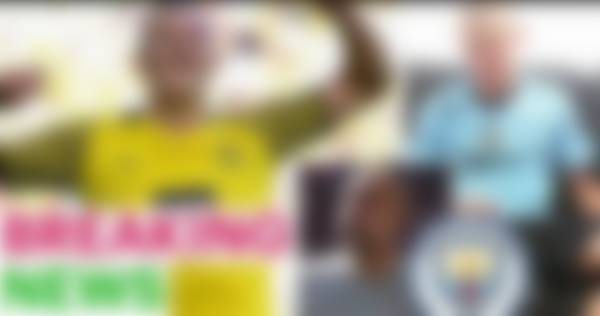 According to Sportsmail, one of the most sought after players in the transfer market, Erling Haaland has agreed to join Manchester City.

Man City were always the front runners to sign the Norwegian star striker, considering their financial capabilities. The report also states that the deal which has been accepted would make Erling Haaland the Premier League’s highest-paid player. He is set to earn £500,000 a week at the Etihad Stadium.

After agreeing on a contract with the player’s representatives, Man City are now looking to trigger the release clause of Haaland, which is set at £63 Million by Borussia Dortmund. If everything goes through, Man City will sign Erling Haaland on a five year deal.

Last week, Dortmund insisted that no contract was agreed between Haaland and any club. They also added that they were trying to come to a conclusion with many clubs, including Real Madrid and Paris Saint-Germain. In reality, Dortmund have been trying to tie the striker down for another year.

However, Man City have slowly and quietly reached an agreement with the striker to a mega deal at the club. Haaland’s father, Alf-Inge, played for City and has been heavily involved in the negotiations with the club.

Manchester City have been in the market for a striker for the past year, ever since the departure of Sergio Aguero. They were unsuccessful in luring Harry Kane to the club. Now, it looks like they have signed one of the best young talents in the world.

His contract would make him the highest plaid player at the Etihad Stadium as well as in the Premier League. A salary in excess of £500,000-a-week would propel him beyond the likes of Kevin De Bruyne, who earns around £385,000.