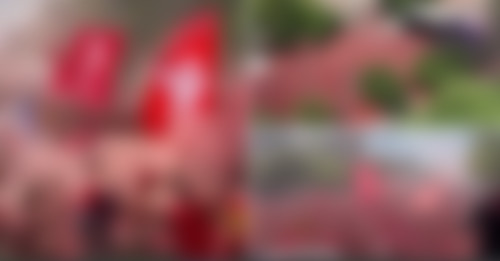 Tens of thousands of Liverpool fans have descended on Paris and painted the city red ahead of tonight’s Champions League final.

Liverpool will take on the 13-time Champions League winners Real Madrid at the Stade de France, just north of the French capital.

As many as 50,000 supporters, largely without tickets, began gathering early during the day. Some of the fans starting the drinking from 7 am, bringing traffic in the area to a standstill as roads were closed off.

Footballs were being kicked into the air and banners being flown while flares which were prohibited by French authorities were let off in the fan zone.

The huge crowd then sang You’ll Never Walk Alone before cheering club legend Kenny Dalglish to a stage which has been set up. He told supporters how remarkable Liverpool’s season had been before they chanted his name.

Fan John Racks, 39, from the Wirral, Merseyside, told PA: “Yeah, the drinking started early, the sun’s out now and it’s getting to my head a bit.”

“I’d like to say at nearly 40 I’m careful but I kind of got lost and started drinking this morning, now I’m smashed. The atmosphere here is boss, the city is red.”

Another said: “I’m sat here on top of some statue in Paris with my mates, there’s nothing more you need. Just a few beers and hopefully a win for the Reds, lovely.”