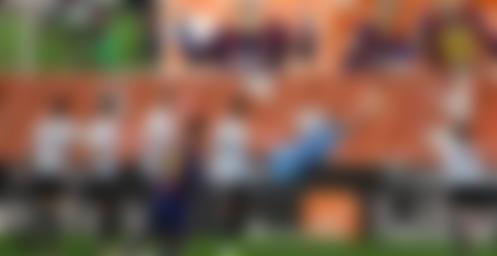 Ronald Koeman was banned from the touchline after showing his dissent against the match official in the game against Granada. The first half was a good display of defending by Valencia against FC Barcelona. As soon as Messi would get the ball the player would be swarmed with three to four white shirts. The one chance that Messi created fell to Ronald Araujo who got his shot saved by jasper Cillessen.

The start of the second half couldn’t have been better for Valencia. Gabriel scored a header from a corner. There were claims off a push on Ter Stegen but the referee made nothing out of that move. Barcelona seemed to be in big trouble. The Valencia defence was sitting deep and solid.

However, the genius of Messi came to save the day. Messi’s cross was handled by the defender Toni Lato, and a penalty was awarded to Barcelona. Cillessen saved Messi’s penalty but Pedri was quick to the rebound and when Gabriel saved his shot on the line the ball came out to Messi who buried it for 1-1.

Just a few minutes later, Antoine Griezmann made it 2-1. Soon after, Messi sent a free-kick from the area darting past Jasper Cillessen to make it 3-1 on 62 minutes.

After the win, FC Barcelona went back on level points with second-placed Real Madrid, two points behind leaders Atletico Madrid.