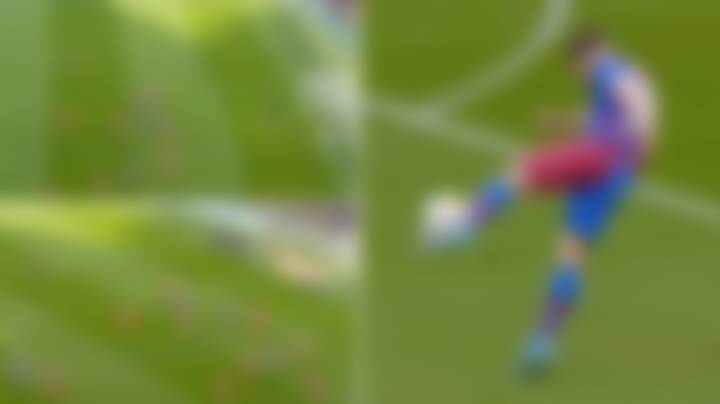 ​The FC Barcelona left-back Jordi Alba scored a ‘Goal of the Season’ contender in Barcelona’s thrilling 4-2 victory over Atletico Madrid on Sunday.

​Alba produced a moment of magic to level the scoring at the Camp Nou, smashing home a stunning volley in the 10th minute. The left-back’s goal was a crucial goal for the Catalan’s side comeback win against Atletico Madrid.

Adama Traore tried to link up with fellow January new boy Ferran Torres, but his pass was intercepted. Dani Alves picked up the loose ball and took a couple of touches before picking out Alba on the other side. The Brazilian full-back lofted a scrumptious ball to Jordi Alba who hit a first-time volley into the back of the net. The Spaniard caught the ball with the outside of his boot, showcasing his absurd technique.

The FC Barcelona veteran caught the volley perfectly with the side of his boot. In fact, he hit it so well that Jan Oblak, one of the best goalkeepers in the world, did not bother to make an effort to stop the shot. It would not be wrong to call it a truly remarkable goal.

Alba’s remarkable goal cancelled out Yannick Carrasco​’s strike, leveling up the score at 1-1. Alba’s goal started the comeback with Gavi and Ronald Araujo making it 2-1, then 3-1 before the break.

In the second half, Alves got himself on the score-sheet, making it 4-1. He then, however got himself sent off in a controversial decision. Atletico tried their best to get back in the game. The former Barcelona striker Luis Suarez pulled one goal back with 20 minutes to go.

In the end, FC Barcelona came out on top. Xavi’s team moved above Diego Simeone’s side to fourth place following the 4-2 victory.