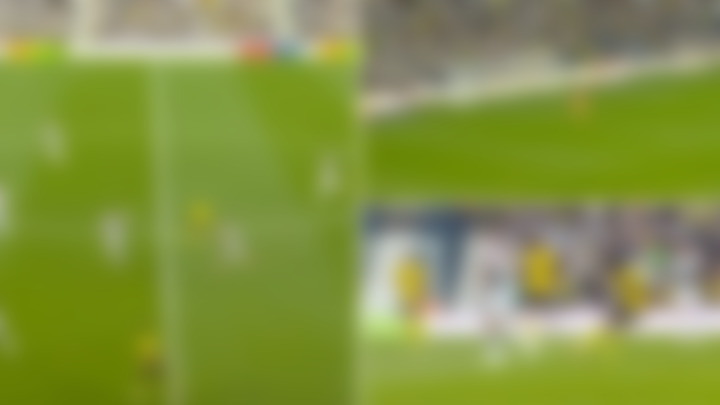 Ismaila Sarr has just scored a goal that might be worthy of winning the Goal of the Season award. His spectacular effort gave Watford the lead against West Brom in the Championship.

Sarr took up the ball unmarked on the halfway line in this evening’s Championship match against West Brom and immediately turned to shoot. The Senegal international caught David Button off guard and chose to try for the spectacular with a right-footed attempt.

Button pedaled back towards his net, powerless as the ball soared past his head and into the net. Just have a look at the video below; you’ll be mindblown.

As Sarr wheeled away in delight with his teammates, home supporters inside the Hawthorns were left stunned into silence. Nobody could believe what they witnessed.

The Watford away end erupted, and cameras showed goalkeeper Daniel Bachmann smiling broadly. As for Ismaila Sarr, the young talent was in ecstasy. What a hit that was!

Fans have responded to the outrageous strike, and some believe it might be the goal of the season already – despite the fact that it has been just a few weeks into the new season.

One person tweeted: “I’m stunned nobody in the Premier League has snapped this guy up.”

Another commented: “Goal of the year sorted already then.”

A third out: “Manchester United will bid £80 million tomorrow.”

While someone commented: “Goodness me that is a special goal.”

Fans on social media were left stunned by this outrageous strike by Ismaila Sarr. Watford fans will hope that he continues his goal-scoring form for the club in the Championship.

Watford were relegated from the Premier League last season but they have started strongly in the Championship. Watford started their campaign by beating Sheffield United 1-0.

Rob Edwards took over as manager from Roy Hodgson over the summer, and he is one of the division’s youngest managers.

West Brom manager Steve Bruce has a 24-year managerial career, and Edwards is a great fan of him.

“Steve [Bruce] is someone I have a lot of respect for,” Rob Edwards said before the match.

“I’ve worked with and under a lot of coaches and there are things I thought were good and things where I thought I’d do it differently.

“I have to be myself and try to be the best I can be but, of course, I will continue to learn from everyone I’m working with.

“There is more I don’t know than do know so I have a lot to learn but a lot of my experiences have got me to this point and am looking forward to hopefully being in a better position at the end of this season.”