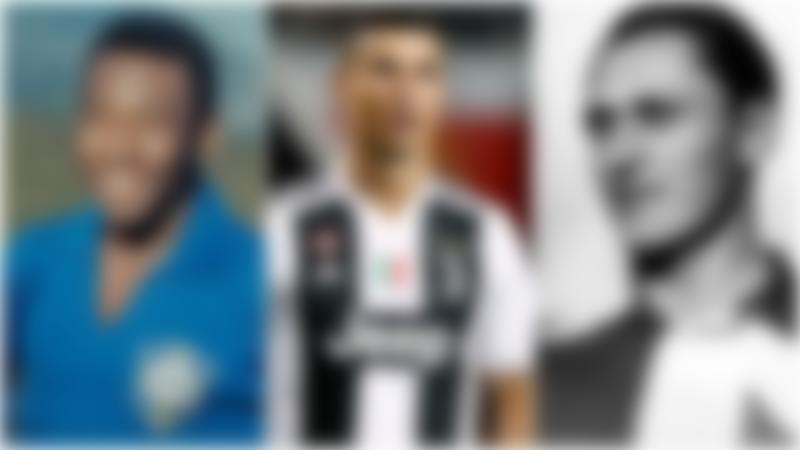 Football is a sensational and popular game all around the world. The goal of the sport is to score goals and win games. Thus, the goal scorers are admired the most out of all the players. There have been some special players throughout the history of the game. History says there have been some prolific goal scorers in the past. Pele and Romario were some of the highest goal scorers in football history. However, the new generation in the sport of football has not disappointed in terms of scoring goals and breaking goal-scoring records

Two of the greatest players ever, Lionel Messi and Cristiano Ronaldo, have scored heaps and heaps of goals in the recent years. Both of these players are catching up and it is only a matter of time before they take the throne for the highest goal scorers in football history.  Ronaldo and Messi are among the best to have ever played the game. The debate over which superstar is superior has raged on for several years. Both men have helped reshape modern football but who else is on the list of the top ten goalscorers of all time and where do the current stars sit? Who is the highest goal scorer in football history?

TheFootballLovers has answered all your questions with a list of the top 10 goal scorers of all time:

Uwe Seeler is a former German professional footballer. He was very well known for his aerial prowess and spectacular scissors-kicks. The Hamburg icon Uwe Seeler is one of the finest forwards Germany has ever produced and an incredibly reliable source of goals for both club and country. He hit 575 in total – and in just 649 appearances too, giving him an amazing 0.89 goals-to-game ratio. Seeler is 10th in the top 10 leading goal scorers of all time.

Seeler was named one of FIFA’s 125 greatest living players by Pelé in 2004. He was the first football player to be awarded the Great Order of Merit of the Federal Republic of Germany.

Ferenc Deak was a Hungarian footballer who played as a striker for teams such as Szentlorinci AC, Ferencvaros and Budapesti Dozsa. Deak averaged more than three goals a game for first club Szentlorinci AC (220 in 72 appearances) before joining Ferencvaros, where he struck 200 times in just 140 outings. He also racked up 29 goals for his country in just 20 games and, though it is not known just how many matches he played at the highest level, he ended his career with a grand total of 576.

He saw his career being overshadowed by Ferenc Puskas but that did not slow him down as he went on to play football for 17 years. Ferenc Deak was the original Hungarian superstar before Puskas. He is in the elite group of football players with more than 500 goals, and definitely one of the best Hungarian players of all time.

Eusebio was a Portuguese footballer who played as a striker. He was an iconic figure in Lisbon, fondly remember by fans across the world. He is considered by many as one of the greatest footballers of all time. Eusebio was famous for his speed, technique, athleticism and his ferocious right-footed shot, making him a prolific goal scorer. He is considered to be Benfica’s greatest ever player, Portugal national team’s greatest, and one of the first world-class African-born players. Eusebio had an incredible goals-per-game ratio, with 623 goals in 639 games.

Known as O Rei in Portugal, Eusebio was one of the most prolific goalscorers of the 1960s and 1970s, spearheading a Benfica side which dominated domestically and conquered Europe. He was the player with the most goals for Benfica, and one of the elite football players with more than 600 goals. He won the Ballon d’Or in 1965.

Gerd Muller is a German former professional footballer. He is regarded as one of the greatest players and goalscorers of all time. Muller was a prolific striker, who was well known for his clinical finishing, especially in and around the six-yard box. He had an overall record of 735 goals in only 793 matches, making him one of the highest goal scorers in history of football. He is definitely one of the best players, making it to 7th in the list of the top 10 soccer players with the most goals.

Muller established himself as a legend at Bayern Munich, remaining the club’s top goal scorer of all time to date with 365 goals in 427 Bundesliga games. He also represented West Germany between 1966 and 1974 during which they won a European Championship in 1972 and the FIFA World Cup in 1974. In fact, he was the player who scored the winning goal for West Germany in the 1974 World Cup final.

Lionel Messi is an Argentinian professional footballer who plays for FC Barcelona as well as the Argentina national football team. He is a true club legend. He is considered the best player in the world and widely regarded as one of the greatest players of all time. Messi has won countless awards to go along with his goals at Barcelona and Argentina. Messi has won a record six Ballon d’Or awards as well as a record six European Golden Shoes.

Lionel Messi is as exceptional at taking chances as he is at creating them. Indeed, to date, the diminutive Argentine has racked up 742 goals in 946 outings. He recently became the highest goal scorer in football club history, overtaking Pele. Pele scored 644 goals for FC Barcelona, the most goals for a club by a single player. He is a member of an elite group of football players with more than 700 goals.

The Argentinian superstar is still going strong and will be looking to overtake a few more names on this list before he retires. Furthermore, even though he has now entered his thirties, Messi is arguably more complete than ever before.

Ferenc Puskas was a Hungarian footballer and manager, widely regarded as one of the greatest players of all time and the sport’s first international superstar. He was small, portly and his right foot wasn’t particularly strong; his left, however, was a cannon and, with it, he scored the majority of his goals. Hungary’s Ferenc Puskas is yet another legend known in the history books as one of the best goal scorers of all time. He ended his career with 746 official goals in 754 matches.

Puskas only played for two clubs in his career – Hungarian side, Budapest Honved (1943-55), and Spanish side, Real Madrid (1958-66), where together with Alfredo Di Stefano, he formed one of the deadliest attacking duos in football. He also played a pivotal role in the Hungarian national team, netting 84 goals in 85 games. Thus, he is one of the top goal scorers of all time and joins some legends in the list of the top ten all time highest goal scorers in football history.

Cristiano Ronaldo is a Portuguese professional footballer who plays as a forward for Serie A club Juventus and captains the Portugal national team. Starting his career off as a winger, Cristiano Ronaldo transformed himself into a goal scoring machine.  He is often considered the best player in the world and widely regarded as one of the greatest players of all time. The Portuguese superstar is at the top of the list of active football players with most goals as well as one of the all time top goal scorers in football history. He is known as the king of Champions League. CR7 currently holds the record for the most goals scored in the Champions League.

A modern great for Manchester United, Real Madrid and now Juventus, Cristiano has won everything in the game. The superstar won five Ballon d’Or awards and four European Golden Shoes. He has broken one record after another, posting tallies in the Champions League that may never be surpassed. He is the highest active goal scorer in international football history, scoring 102 goals for Portugal. Remarkably, as he heads into the other side of his thirties, he has shown little sign of slowing down and continues to hit the back of the net at an impressive rate for Juventus.

Pele is a Brazilian former professional footballer who played as a forward. Perhaps the most well-known footballer in the history of the sport, Santos and Brazilian legend, Pele is not only one of the most prolific goalscorers in football but is deemed by many to be the greatest footballer of all time. Pele is a legend at Santos, as he remains to be the player with the most appearances for the club and its all-time top-scorer. By the end of his career, the Brazilian legend had scored 767 official career goals in 831 matches, which is still a mind-blowing record to have. Thus, he had a staggering strike rate of 0.92 goals per game and is one of the top 5 football players with the highest goals in the history of football.

The most important game in his career was arguably the 1958 World Cup in which the 17-year-old player emerged to be the hero for his national team. Brazil went on to win the World Cup title that year, after which they won two other editions in 1962 and 1970. He makes it to the list of the highest goal scorers in football history.

Romario is a Brazilian professional footballer. A prolific striker renowned for his clinical finishing, he is regarded as one of the greatest players of all time. By the end of his career, he had a record of 772 goals in just 994 games. This made him the second highest top-scorer of all time, and one of the top 5 football players with highest goals.

He enjoyed a stellar career at a number of top clubs around the world.  The Brazilian began his 24-year-long career with Vasco da Gama in 1985, before moving to PSV and later, Barcelona. He flourished at the two teams, scoring a staggering 165 goals in 167 games for PSV and an impressive 39 goals in his two seasons at Barcelona. The Brazilian then went on to play for the likes of Flamengo and Valencia.

He played for the Brazilian national team between 1987 and 2005, scoring 55 goals. Romario also lead Brazil to World Cup glory in 1994, scoring five goals in the tournament.

Josef Bican was an Austrian-Czech professional footballer who played as a striker. Josef Bican is currently the highest goal scorer of all time with 805 goals. However, only a few know the name of Josef Bican, despite being the player with the most goals.

Bican was a star in Austria in the 1930s, he was a member of the side that reached the 1934 World Cup semi-finals, but he actually continued playing until 1955, eventually retiring at the age of 42. By that point, Bican, a two-footed forward blessed with sprinter-like pace, had scored a record 805 goals. Thus, he is the player with the most goals in football history.

The International Federation of Football History & Statistics (IFFHS) even awarded him with the “Golden Ball” recognizing him as the greatest goal scorer of the last century, and the player with the most official goals.

Bican has played for a host of Czech clubs but is best known for his stints at Rapid Vienna and Slavia Prague. The Czech star scored 52 goals in 49 games for Vienna and an incredible 395 goals in 217 appearances with Prague. Internationally, Bican played for three different countries – Austria (1933-36), Czech Republic (1938-49), and Bohemia and Moravia in 1939.

Years after his retirement, his incredible record of being the current highest goal scorer in football history still stands and it is yet to be seen whether it will ever be beaten.