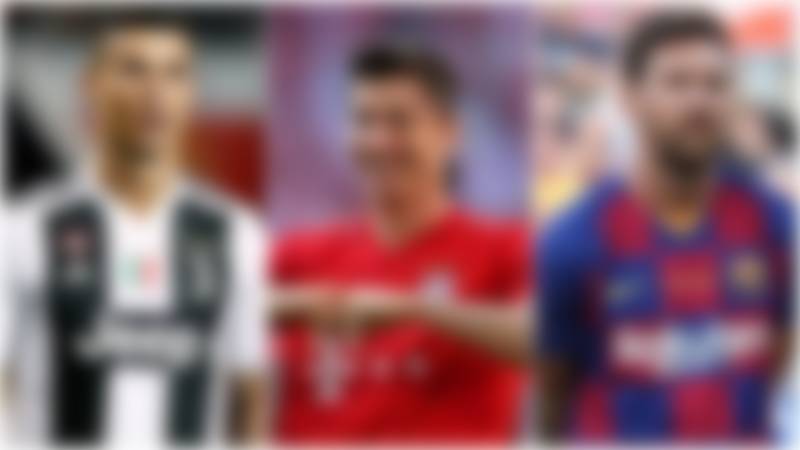 The UEFA Champions League has maintained a standard of its own over the years, where it has asserted itself as the best competition in all of Europe. The best clubs from around Europe facing off against each other makes the Champions League truly great. The UEFA Champions League is at a level far superior to that of any other league. It is the biggest stage of it all, and there is no doubt about it. Every player dreams of scoring goals to help their club lift the most prestigious trophy in club football.

The Champions League has been graced by some of the greatest goal scorers in the history of the sport. From Cristiano Ronaldo to Lionel Messi and Raul to Andriy Shevchenko, the deadliest finishers in Europe’s best club competition are among the greatest names to ever play the game.

Andriy Shevchenko is a former professional Ukrainian football player. He played as a striker for Dynamo Kyiv, Milan, Chelsea and the Ukraine national team. He was well known for being fast, energetic, and hardworking. One of the most clinical strikers to ever grace the competition, Andriy Shevchenko made exactly 100 Champions League appearances between 1994 and 2012, scoring 48 goals in the process. He is the only Ukrainian footballer on the list of Champions League top scorers of all time.

Shevchenko’s UCL goals for his different clubs are 15 (Dynamo Kyiv), 24 (AC Milan), and 9 (Chelsea). With the 48 goals that the 43-year-old retired Ukrainian forward has scored in his 100 UCL appearances, he has a goal-to-appearance ratio of 0.48. This means that he has scored almost one goal in every two UCL appearances he has made. He has also won one UCL title with AC Milan in 2002-03 season.

Zlatan Ibrahimovic is a Swedish professional footballer. He is considered to be one of the best strikers of all time. Ibrahimovic also scored 48 UCL goals like Shevchenko, but in 120 appearances which means he gets a lower goal-to-appearance ratio than Shevchenko. Thus, he is 9th in the list of the top scorers in Champions League history.

Ibrahimovic is the only footballer on the list of Champions League top scorers of all time who has played for six clubs: Ajax, Juventus, Inter Milan, Barcelona, AC Milan, and PSG. However, Zlatan has never won a Champions league title with any of the teams he has played for. He was once named as the top assist provider in the 2012-13 season.

Alfredo Di Stefano was regarded as one of the best footballers of all time. He was known for being a powerful, quick, skilful, and prolific forward. He also had great stamina, tactical versatility, creativity, and vision. He is one of the Champions League all-time top scorers. Like his Argentinian country mate, Lionel Messi, Alfredo Di Stefano only played for one club in UCL competitions. However, that club was not Barcelona; it was Real Madrid.

Di Stefano scored 49 goals in his 58 UCL appearances for the Los Blancos. Thus, he had an amazing goal-to-appearance ratio of 0.84. Being in the top 10 scorers in Champions League history, Stefano won 5 European cup titles with Real Madrid. He is among the few footballers on the list of UCL all-time top scorers who have played in the first editions of the Champions League starting from 1955.

Thierry Henry was a former French professional footballer. He is regarded as one of the greatest strikers of all time as well as one of the greatest players in the history of the Premier League. He was runner up for the Ballon d’Or in 2003. He was also included in the UEFA Team of the Year five times. Henry is 7th in the list of top ten UEFA Champions League scorers of all-time.

Henry scored all his 50 UCL goals in 112 appearances. Thus, he has a goal to match the ratio of 0.45 which is a little bit less than one goal in every two appearances he has had in the Champions League. He played in the UEFA Champions League from 1997 to 2012, and for three clubs: Monaco (7), Arsenal (35), and Barcelona (8). Henry has won only one UCL title with Barcelona in 2008-09 season. However, he has also finished runner-up once in 2005-06 season of UEFA Champions League with Arsenal.

Ruud Van Nistelrooy is a former Dutch professional football player. He was known for being extremely clinical in front of goal. Van Nistelrooy had an outstanding striking and finishing ability with either foot as well as his head. He earned a reputation as one of the best strikers of his generation.

Van Nistelrooy is probably the greatest Dutch striker to have ever played in the Champions League. The stats show that he is, no doubt, the best goal scorer to feature from his nation in the competition. Van Nistelrooy scored 56 goals in 73 appearances at the Champions League, becoming one of the top UCL scorers ever. Thus, he has an impressive goals per match ratio of 0.77. He scored his UCL goals for three clubs: PSV Eindhoven (8), Manchester United (35), and Real Madrid (13).

Karim Benzema is a French professional footballer. He is known for his aerial ability, work rate, playmaking and finishing. Benzema is considered to be one of the best strikers in the world. He has remained as one of the best players for Real Madrid over the years and has stayed, despite seeing many of his companions leave. The Los Blancos striker does not get as much credit as he deserves. He was part of the famous Real Madrid BBC trio and a four-time Champions League winner and 5th in the Champions League top goal scorers of all time.

Raul is a former Spanish football player. He is regarded as one of the most important players in the history of Real Madrid as well as one of the greatest Spanish strikers of all-time. Raul is a beloved figure among the Real Madrid fans. Raul was the man for the big occasions and the Champions League was one of the favored competitions for the Spaniard.

For many years, Raul was the Champions League’s all-time top scorer with his tally of 71. He scored these 71 goals in 142 UCL appearances from 1995 to 2011. The goals were scored for 2 clubs: 66 for Real Madrid and 4 for Schalke of Germany. Thus, the Spanish striker has got a goal to match ratio of 0.5 in the Champions League. Raul won 3 UCL titles with Real Madrid, playing a vital role in the success of his team.

Robert Lewandowski is one of the best active strikers in the world. He is widely known for being lethal in his finishing from inside and outside the box. He is undoubtedly one of the greatest players in the Bundesliga. The Polish striker had the most goals in the Champions League season 2019-20 and at 32 years of age, he shows no sign of stopping. He is ranked 3rd in the list of the top scorers in Champions League history.

The superstar striker has scored 71 goals in his 94 UCL appearances. This gives him a very impressive goal to match the ratio of 0.76. Out of all the goals Lewandowski has scored in the UCL, 54 have been scored for Bayern Munich and 17 for Borussia Dortmund. All this indicates that Lewandowski is indeed a prolific goal scorer in the UCL and that is why he made it into the elite category of top 10 scorers in Champions League history.

Lionel Messi is regarded by many as the greatest player in the history of football. He is undoubtedly the greatest Argentinian player to grace the Champions League. The superstar has scored 118 goals for his club FC Barcelona in 147 UCL appearances. Thus, he has an outstanding goal to match the ratio of 0.8. Messi has been the driving force for Barcelona over the years. He has been an outrageous player in the Champions League for his club.

The FC Barcelona legend has been scoring some outstanding goals and proving time and again how truly special he is. He has helped his club win multiple UCL titles with his incredible dribbling, play-making and goal scoring skills. Messi has won 4 UEFA Champions League titles with Barcelona so far.

Cristiano Ronaldo is one of the best players in the world to ever step foot in a football ground. If there was any player who was made to handle the pressure of the biggest stage of it all, it is Cristiano Ronaldo. The superstar striker is the highest goal scorer in Champions League history. He has scored an incredible 134 goals in 174 UCL appearances. Thus, he has a goal to match the ratio of 0.77.

The Portuguese has also won the Champions League title a record five times. Being the highest goal scorer in UEFA Champions league history, he has led Real Madrid to 4 UCL titles and won one with Manchester United in the early stages of his career. Thus, he is very easily the best player in Champions League history.