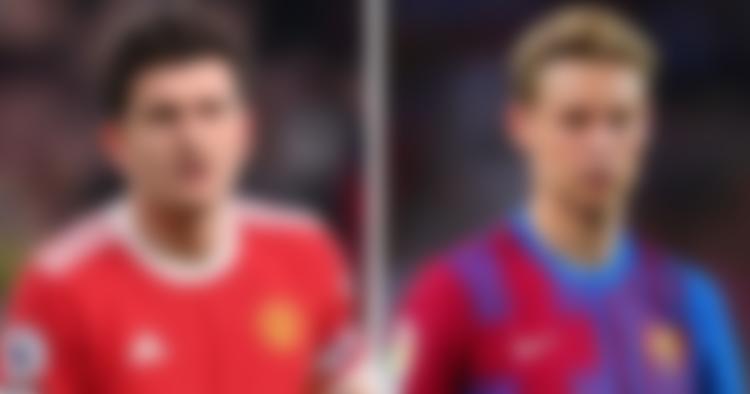 Manchester United have turned down Barcelona’s attempt to sign their captain Harry Maguire as part of a deal for Frenkie de Jong.

Barcelona is said to be interested in adding Harry Maguire to their ranks this summer. The club wants a center back in the summer window, and thought of this as a cheap opportunity.

According to a report from The Sun, Barcelona were looking to see if Man United would include the English defender in a deal to bring Frenkie de Jong to Erik ten Hag’s side. However, Manchester United are reluctant to part ways with their club captain as new boss Ten Hag is keen to work with him.

As far as Harry Maguire is concerned, the English defender had a horrible season at Old Trafford. He was heavily criticized for his poor defending skills, as well as lack of leadership abilities. After Man United finished in sixth place, the fans bashed the defender, stating him to be their worst signing ever.

Barcelona manager Xavi is on the lookout for a new center back, especially with Gerard Pique undergoing fitness issues and Samuel Umtiti likely to depart. Thus, they were eager to bring in Harry Maguire. Given his tendency to push forward with the ball at times, Maguire could well have suited Barcelona’s style of play.

Frenkie de Jong is Erik Ten hag’s transfer priority during this summer transfer window. He will be the major signing as far as Man United is concerned. There have been talks ongoing between Barcelona and Manchester United for the transfer of the Dutch midfielder. A £55 Million fee is being discussed plus bonuses which could see it rise to around £68 Million.

Frenkie de Jong is the star of the major midfield overhaul at Old Trafford. With Nemanja Matic, Paul Pogba, Juan Mata and Jesse Lingard all leaving the club, Manchester United need reinforcements in the middle of the pitch.