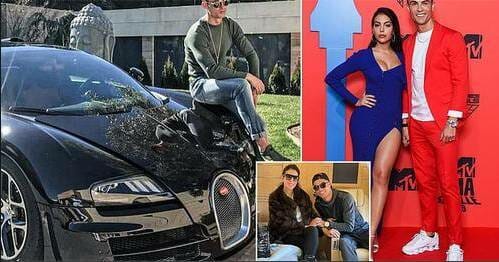 Cristiano Ronaldo’s partner Georgina Rodriguez has revealed the superstar would send her work colleagues ‘crazy’ after picking her up in his flashy Bugatti sports car.

The star of a new six-part documentary about Georgina Rodriguez’s’ rise to stardom alongside the mercurial Portuguese forward, Rodriguez has opened up on enjoying the high life.

Now, her life has changed as she has become a model and influencer. She has sensationally gone from taking public transport to being ferried around by a vehicle from the famous footballer’s vast, mega-millions fleet.

Georgina Rodriguez worked in a Gucci store when she met the current Manchester United forward in 2016, and described for the show how she would return home in style.

“Many times he’d come after work and I’d get out after 10 at night,” she said.

During his free time, when he doesn’t have to play football, Ronaldo often travels across the globe using his Gulfstream G20 jet, which is reported to have cost around £20million.

Capable of reaching top speeds of 560mph and enjoying a range of 3,910 miles with four passengers on board, the jet has been heavily used by the young family.

Its ease of access has left Georgina accustomed to moving around in luxury – to the extent that she is now reluctant to hop onto a standard economy plane with her boyfriend.

“To me the best part of travelling in Cristiano’s jet is its crew, no doubt,” she said.

“The jet does really make life much easier,” she said.

And, speaking ahead of a trip to Paris, she added: “If I had to be in an airport for two hours with Cristiano I’d go insane. I mean I couldn’t go, I’d rather not travel.”

Ronaldo himself features in the documentary about his partner, and admitted on camera that it didn’t take long for him to realize ‘Georgina was the woman of my life’.

He said: “To me it was “normal”, because she was already my girlfriend.”

“I know the cars I have and I’m not going to pick her up in a taxi. It was funny because I would wait for her outside the store in these flashy cars I have. Georgina’s really good in that sense. She would leave the store quickly, get in the car and we’d go home.”