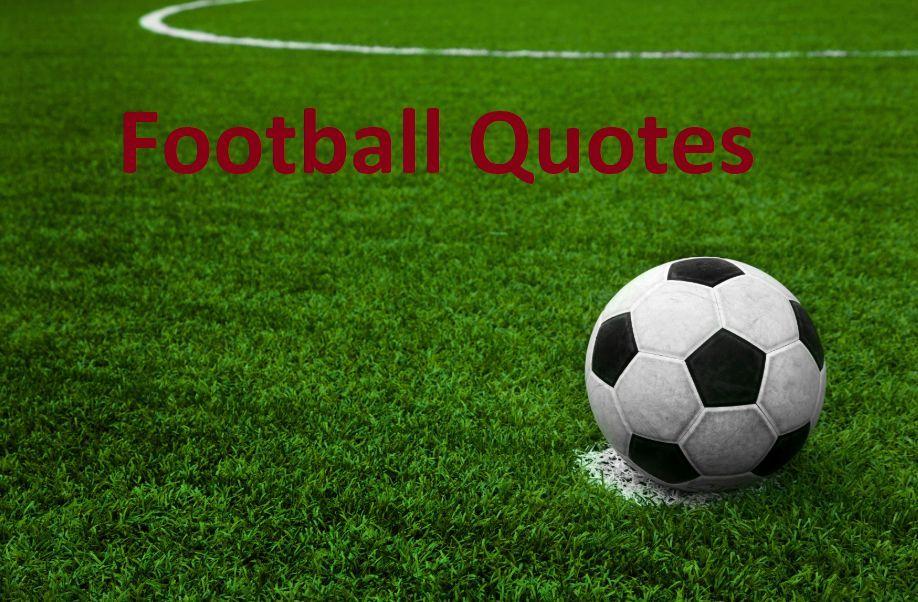 People often term football as the “beautiful game”. The spirit of football players, the sportsmanship, the passion of the supporters, the fans, you don’t find that in any other game but football. Today, we look at the best football lovers quotes.

Football can be played anywhere and in any weather. That’s the beauty of this game that no storm no hurricane can stop it.

“Anyone who thinks sunshine is happiness has never played football in the rain!”

Football isn’t just about using your feet but you have to put your heart in the game as well.

The beautiful game that’s known as Football is all about the joy you get while playing it.

“Football is about joy. It’s about dribbling. I favor every idea that makes the game beautiful. Every good idea has to last.”

The great Bill Shankly once said that the love for football is even more serious than the matter of life and death.

“Some people say football is a matter of life and death. I don’t like that attitude. I can assure them it is much serious than that.”

Girls don’t usually like watching or playing or football. But there are some girls out there in this world who actually love football! Some people think those girls are weird. But they are really not weird. They are just special!

“Girls who love football are not weird. They are just a rare gift from God and deserve bigger diamonds.”

Someone has rightly said that:

“A girl who loves football is a girl worth keeping!”

Then there are some girls who love football players and not the sport itself.

Paul Grasmanis loves football and thinks that he can play football all over again.

“I am still a kid who loves playing football. I love the locker room, I love the guys. I love what I do for a living, and if you asked me would I do it all over again, absolutely!

Football is much more than just a game where you score a goal or win a match. It’s a relationship where only love shines bright.

“I learnt all about life with a ball at my feet.”

“I once cried because I had no shoes to play football. But one day I saw a man who had no legs, and I realized how rich I am.”

Someone believes that Football is even more than a religion!

“The biggest religion in the world is not even a religion. It’s football.”

Football is like a war, it’s that serious for the players.

“Football is just like a war minus the shooting.”

Albert Camus owes it to football for teaching him everything about life.

“Everything I know about morality and the obligations of men, I owe it to football.”

Football is just more than a game.

“The important thing about football..

The important thing about football..

Is that it’s not just about football.”

“I love football and it’s a game where you are supposed to have fun not dwell on the losses. It has always been my dream to make it to the professional football and football has also helped me get a scholarship.”

Football is a gift to the humans by the God and it is a very very special gift.

“Football is a gift to the humanity by the God.”

“If you don’t live, eat, and breathe football, then you are not a true football player. You just wear the jersey.”

“What I do is play football and that’s what I like the most in my life.”

“I love football and I love winning and if things are not going right I get annoyed.”

“If football has taught my anything it is that you can overcome anything if, and only if, you love something enough.”

“I love football. Football is my life.”

“I just want people to see me as a hard-working football player and someone who is passionate about the game.”

“Football is an honest game. It’s true to life. It is about sharing. Football is a team game and so is life.”

“Football may not be my profession but it will always be my passion.”

“Football might just be the reason I am alive and worthy.”

“Football is not something that you can fake. It’s an honest game. It is a passion and a lifestyle. Football is true to life.”

“Every time I step onto the pitch, all my troubles go away and the only thing that matters on the field is the beautiful game – football.”

Here you will all the romantic football quotes that you might want to share with your loved ones!

“My six word love story: I fell for a football player.”

“Football players are naturally sexy, it’s proven by the science!”

“A woman who loves football is a woman worth keeping.”

“Girls who love football are rare. Wife ’em up.”

“If you think losing a girlfriend is the worst feeling ever, try getting nutmegged by someone.

“Happiness is, having a girlfriend who loves football.”

“Football is an unconditional love.”

“I was meant to date a captain of a football team, I was going to be on a romantic excursion every Saturday night, I was destined to be collecting corsages from every boy in the town before the prom, accepting such floral offerings like competing sacrifices to a Delphic goddess.”

“My boyfriend is smart, funny, and a great football player.”

“I’m not a dreamer, I am a football romantic.”

“My six word love story: I fell in love with a football player.”

Football love quotes for him

“I vow to always love you, even during the football season.

“That man who knows how to win and move football. I like him and I would love to have him.”

“If you are lucky enough to find a football lovers, never let him go.”

“Football players are naturally sexy, science has proven it.”

“Couples that watch football together, stays together.”

“I just wanna be the girl waiting after your football game, with a gatorade and a kiss and your number on my back.”

“I got my love for football watching him play in high school and then going off to college. I talk to him for 4 or 5 times a day. He is married and now he has 2 kids, but whenever I go home, we have video game battles like we are still teenagers.”

“Couples who play football are the best kind of couples.”

Football love quotes for Instagram to use as captions.

“Football is a team sport and there is no one individual who is bigger than the next person.”

“Playing football for me is one of those things you can not explain, it’s love, it’s desire, it’s unexplainable.”

“We didn’t lose the football game, we just ran out of time.”

“You don’t have to life us, but you have to respect us.”

“I love my doubters because they make me work even harder.”