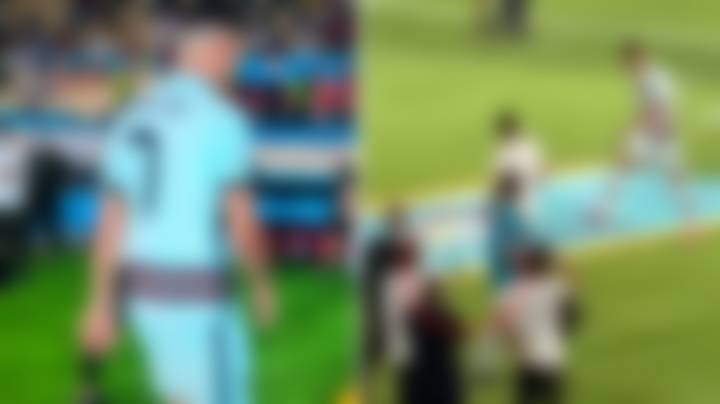 The Portuguese superstar Cristiano Ronaldo played a huge part in Portugal’s journey to the round of 16, scoring five times in three games during their Group F clashes against France, Germany and Hungary. Thus, he took his tally to 45 goals in 58 games for club and country this season.

However, even Cristiano Ronaldo was not enough to defeat the World No.1 ranked Belgium side. Thorgen Hazard scored from a rocket strike outside the box in the 42nd minute, leading Belgium to a 1-0 victory and into the quarter-finals of the Euro 2020.

This was a very disappointing end to a great tournament for the five-time Ballon d’Or winner. as he was searching for another international title for his country. After the final whistle, he expressed his frustration at the result by throwing his captain’s armband to the ground before kicking it away.

As it can be seen in the fan footage above, Ronaldo threw his armband on the floor and kicked it. A member of staff picked up the armband moments later.

Ronaldo also expressed his disappointment after the final whistle when he once again threw his armband to the floor.

“He’s the most intelligent player I have seen in my life,” his former Manchester United teammate and commentator Roy Keane said. “Obviously, I’m not going back to the 50s and 60s but the guy loves scoring goals. His intelligence is amazing, how he plays the game, he doesn’t get involved in build-up play but he’s got that trickery and arrogance which you need from the great players.”

What are your thoughts on Ronaldo’s decision to kick his armband after the full-time whistle?