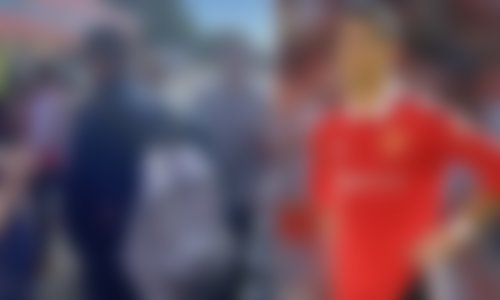 Cristiano Ronaldo returned to training last week and was named in the starting eleven against Rayo Vallecano. However, the prolific striker was subbed off at halftime.

Ronaldo was the only player to be subbed off by manager Erik ten Tag. The rumored early departure occurs as Ronaldo’s future at Old Trafford is unknown.

The Portuguese superstar reportedly wants out of the team because Manchester United will not be playing in the Champions League this year. Erik ten Hag taking Ronaldo off the pitch doesn’t make matters easier for him.

In order to improve his focus, Ronaldo practiced separately from the rest of the team on Wednesday. He also attended the friendly game between Wrexham that was played behind closed doors.

Ten Hag acknowledged before of the friendly against Rayo Vallecano that Ronaldo won’t be on the same level as his teammates.

“He is not on the level of the rest of the squad because he missed a lot of weeks. But he needs games and he needs training, a lot,” Ten Hag stated.

Cristiano Ronaldo has been absent from United’s preseason this far due to rumors that he wants to leave the team. When the Portuguese superstar initially came out of the tunnel to warm up at Old Trafford, he appeared to get a positive reception.

The sole change Erik ten Hag made at halftime was to substitute Cristiano Ronaldo, who had played for the opening 45 minutes of the friendly. Ronaldo didn’t seem to be happy with that decision.

The five-time Ballon d’Or winner didn’t appear to be the sharpest throughout his 45 minutes, which is probably not unexpected given that he missed the majority of the preseason with United.

Amad Diallo – who replaced Ronaldo at halftime – opened the scoring within a few minutes after entering the pitch. However, the lead was gone when Alvaro Garcia equalized with thirty minutes remaining. The match ended with a scoreline of 1-1.

The question remains; did Cristiano Ronaldo watch the second half? Since it’s being asserted that he departed the stadium before the final whistle.

Fans caught a picture of Ronaldo leaving Old Trafford at halftime and the picture has been circulating on Twitter. That was really unexpected, much to everyone’s surprise.

Manager Ten Hag may have given Ronaldo permission to exit the game early for a number of reasons. But for someone who wants to quit the club, it’s not a good look to do so without a reason.

Ronaldo is now the target of more outrage for leaving Old Trafford before the game ended. A Twitter user wrote, “Not even waited for the final whistle.”

“The king is gone” and “Honest haha everyone was like wtf” were the user’s subsequent tweets.

Another user tweeted: “Can’t stress how bad of a look this is by Cristiano, both in terms of professionalism but also as an example to the youngsters who all played today. Don’t care who you are. Bin.”

Some users are already predicting that this might be the last time they see Cristiano Ronaldo at Old Trafford.

What role Cristiano Ronaldo will play in Manchester United’s home Premier League opener against Brighton on Sunday is yet unknown.