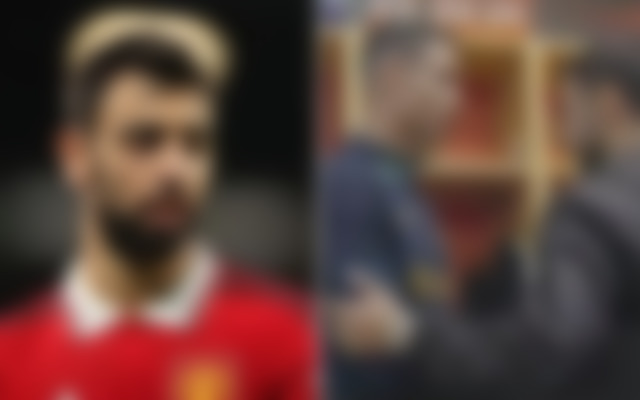 This year’s FIFA World Cup kicks back again this coming Sunday. In the midst of the club football season, the teams have begun to arrive in Qatar. Yet, all the buzz is on Portugal star Cristiano Ronaldo, who gave an explosive interview to British journalist Piers Morgan. Ronaldo criticized Manchester United’s upper management and manager Erik ten Hag in the interview, and he also discussed his recent treatment.

After a tumultuous few months, it seems that Ronaldo has chosen to go rogue and quit Manchester United, despite the fact that this is already common knowledge. Anyone who saw Ronaldo express his thoughts was curious about the dynamic between Ronaldo and Bruno Fernandes, a colleague of Ronaldo’s at Manchester United, in the Portugal locker room.

The tension between the two stars has lived up to the buildup, as shown in a Twitter video shared by Selecao Portugal.

As Fernandes entered the locker room, he reached out to touch Ronaldo’s arm as the Portuguese forward passed by him to set down his luggage. Next, Ronaldo extends his hand for a handshake. For a while, Fernandes seemed hesitant before he approached Ronaldo and welcomed him. As soon as they exchanged words, Fernandes moved to welcome his teammates.

Ronaldo has expressed his displeasure with Manchester United’s owners, the Glazer Family, alleging that they are not invested in the team’s athletic performance. It’s worth noting that the incendiary interview hasn’t been broadcast in its whole, and just excerpts are already making the rounds on social media.

Previously, Ronaldo had claimed that the club’s upper management did not want him there and that he had little regard for manager Erik ten Hag.