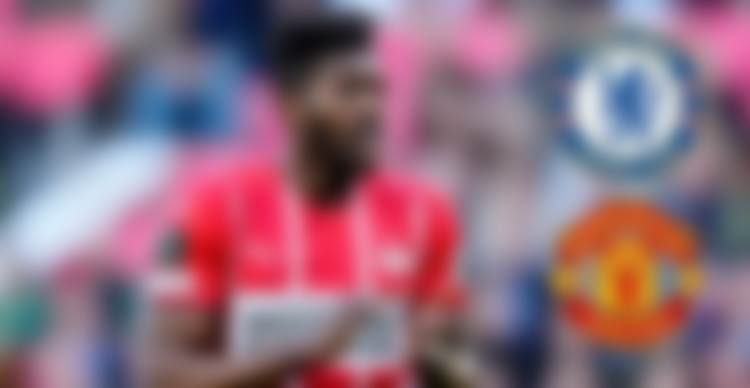 The Perfect Declan Rice Replacement?? Chelsea and Manchester United are two clubs in the Premier League that have yet to start transfer business of any kind due to different reasons. While Chelsea has just completed the formalities of the club being officially entered under the ownership of Todd Boehly, Manchester United has just made an entire reshuffle of the coaching staff, the board, as well as certain key positions in the hierarchy. But currently, both clubs have their eyes on a player who has been making waves across the continent with his performances and his impact.

According to reports, both clubs have been cuddling around PSV Eindhoven midfielder Ibrahima Sangare. The Ivory Coast international has been one of the key players for both his club and country, with the defensive midfielder having an impressive African Cup of Nations for Ivory Coast. Both clubs have been looking for alternative options for Declan Rice, on whom the Hammers have put a rather prohibitive price tag of £150m.

With Sangare having a release clause of  €35m (£29.9m), this is a player who could be available for a cheap price, with reports in the Netherlands also stating that he has his heart set on a move to the Premier League, indicating that the 24-year-old feels ready and capable of making the next big step as far his career is concerned.

Which Premier League Club Will End Up Signing Declan Rice And Who Will Sign An Alternative?

Sangare joined the  Dutch club in 2020 from the French outfit Toulouse and has established himself to be one of the best midfielders in this season of the Eredivisie. And while he still does have 3 years remaining on his current contract, the fact that he is ready to move means that PSV will be forced to countenance a sale to cash on their asset sooner rather than later.

He would be a readymade fit for both clubs, with Chelsea looking for an alternative to N’golo Kante, who has been injured quite often last season, while United has been in the market for years for a defensive midfielder, and now that the only player for that position in Nemanja Matic has left the club as a free agent, now seems the right time to finally make a play for the midfielder that they so desperately need.

Both these clubs are giants of the English game, and both have the ability to splash the cash when given, but in the end, only one of these clubs will be successful in getting the player to play in their colours. Whether it is Manchester, London, or any other club, that question remains to be answered.

But what is not needed answering is the requirement of both the clubs for that position and the availability of a player in the exact same position. It is just a matter of which team makes the first move. Could this mean the end of the Declan Rice saga?