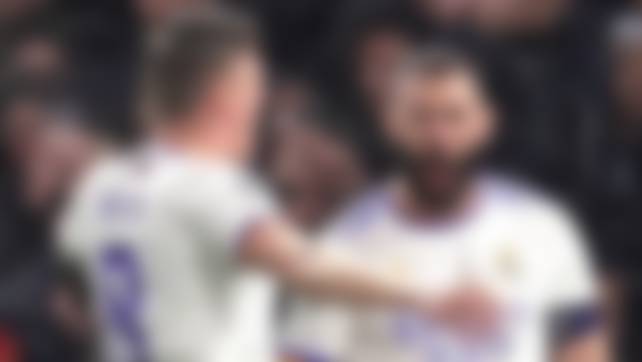 Right now, only the lazy aren’t polling who should win the Ballon d’Or in 2022.  And although this year is only three months old, votes are confidently cast in favor of Benzema.  But everyone seemed to be saying that Mbappe would become the next dominator after Messi and Ronaldo.  But an experienced veteran deftly pushed his compatriot into the background.  In the last round, he personally did it, turning the game with PSG and scoring three goals.  This time, too, he did not waste time on trifles and shipped the same three goals to Chelsea.

In the middle of the first half, Benzema turned a fairly equal game into a very unambiguous one in three minutes, having issued a double after the filings of Vinicius and Modic.  Moreover, the goals with the head turned out to be so flawless that only comparisons with actions in some kind of computer game really came to mind.  Everything looked too perfect.  Of course, the difference of two goals required some kind of shock therapy from Chelsea.  Before the break, Havertz softened the bitterness by playing one ball from Jorginho’s filing.

But Tuchel still had a shake-up at half-time, deciding on two serious substitutions.  He made two substitutions, dropping the attacking Ziyech instead of the all-consuming defensive midfielder Kante and Kovacic in the middle line instead of defender Christensen.  Apparently, the work was carried out orally.  But Tuchel overdid it, because some of his guys came out of the locker room with trembling hamstrings and some terrible thoughts in their heads.  There is no other way to explain the mistakes of Mendy and Rüdiger, who gave Benzema the third ball.

In the future, the coaches worked as substitutions, trying to pass each other. Tuchel added power with the help of Loftus-Cheek and Lukaku, but they and their partners at the end of the match simply lacked accuracy and execution.  And Ancelotti refreshed the lines and threw Bale into the fight for nostalgia.  Of course, there would be a number if Gareth scored, but somehow there were no such shocks.

Quite expectedly, the Londoners hit on goal much more often – they were forced to do this not so much by the status of the host, but by the score on the scoreboard.  However, the exact hits of Chelsea and Real Madrid are equal.  And here it is necessary to note, first of all, the effectiveness of Madrid.  Rather, one Benzema, whose role in the promotion of Real Madrid is hard to overestimate.  In this game, he made four shots on goal, and three were assists.

Havertz was Chelsea’s top hitter with six tries.  One has been successful.  In total, Real Madrid carried out 17 attacks, which is very few.  And again we are talking about efficiency.  At Chelsea, UEFA counted 56 attacks.  It is worth noting that for the entire second half, Real Madrid scored only one shot, and he became an assist.  But Chelsea were noticeably more active in the second half, but managed to convert only one moment.  How can one not recall Lukaku’s header wide of the target in the position from which Benzema scored in the first half.  This is what makes the difference.

Practice shows that the main factor in pleasant viewing of the game is not so much the number of goals as the accuracy of the passes.  It happens that after a 0-0 score and a small number of scoring chances, you feel delighted and joy from watching, chained to the screen.  This is reminiscent of the logic of the musical narrative.  When teams combine quickly and accurately, even if these combinations do not end in goals, it is always a pleasure to watch.

Of course, we are not talking about those infrequent cases when teams just stand in their halves of the field and pass the ball a couple of meters to the side.  In this match, Chelsea and Real Madrid produced excellent passing accuracy, corresponding to the level of the clubs and the stage of the tournament.  At the same time, the Londoners, having more possession of the ball, made more passes: 554 versus 408. Chelsea also has more mileage – almost 113 kilometers versus 110 and a half for Real Madrid.

7 – how many matches in a row Benzema scores, if you count those in which he participated.  In them, he scored 12 goals.

6 – Benzema has scored so many goals in his last two Champions League matches.

42 – so many goals scored by Benzema this season, of which 37 are for Real Madrid (in 36 matches) and 5 for the French team.  For the first time, he scored more than 40 goals in a season.

11 – How many goals have Benzema scored in the current Champions League.  But he takes only second place, sharing it with Aller from Ajax.  Lewandowski has 12 goals.

But just about Lewandowski.  Robert wards Unai Emery ate and did not choke.  The Pole, threatening to shoot any Bundesliga team, was not seen on the field in the match with Villarreal.  Emery’s tactics and his striker Moreno were in charge there, basically.

The Spaniards, without any hesitation, chose the method of counterattacks, which proved to be effective already in the opening.  At the 8th minute, Danzhuma brought the “yellow submarine” forward.  One would have thought that this was just an accident, which Bayern, accustomed to dominating, would quickly correct.  But time passed, and there were no corrections.

Moreover, at the end of the half, Coquelin beautifully scored the second goal, however, from offside.  And at the beginning of the second half, Moreno loaded into the post, recalling the potential of Villarreal’s counterattacks.  Of course, at some moments Bayern pressed the opponent very powerfully.  But the Spaniards did not flinch and kept the winning score.  By the way, since February 2019, Bayern have not left a Champions League match without a goal.

It seems that Atlético in Spain has a follower, more effective and even more spectacular.  At least in European competition and at this point in time.  The success of Villarreal in the confrontation with Juventus seemed to someone a lucky break.  “Bavaria” “yellow submarine” has not yet passed, but showed the same efficiency.  Villarreal has only one shot on target, but there is still a goal not counted due to offside, as well as a hit in the frame by Moreno.

By the way, Gerard became the most hitting on the field – he has four attempts. Bayern has a whole group of players with three hits. And not a single successful one. And Lewandowski was covered so well that he only took two hits.  It seems that the Poles have learned to close, except that in the Bundesliga they have not yet learned this skill. It should be noted the effectiveness of “Villarreal” in defense with sufficient freshness.

For example, in the first half, Bayern landed only five shots and none on target.  If in the return game with Juventus Unai Emery’s team did everything at the end of the meeting, then this time it was exactly the opposite – and managed to keep the obtained unsteady advantage in the first half.  At the same time, UEFA does not believe that Villarreal was so closed.  He carried out 41 attacks, which is a lot.  Although Bayern had 67 of them.

Everything here is quite predictable.  Bayern had much more possession in the first half and in the second.  Although it was not directly undivided control.  The same Manchester City in a much more convincing manner broke Atletico in control and sharpness.  Villarreal in this regard has moved further than their Madrid counterparts, but they also played at home, and Bayern is still not City.

At the same time, Villarreal has the same relatively low accuracy and number of passes.  The Spaniards made 282 accurate passes throughout the game, while Bayern made 496. But both teams ran much more than the average figures in the Champions League, demonstrated by the same Chelsea and Real Madrid.  Bayern have 122 kilometers, while Villarreal have 121.