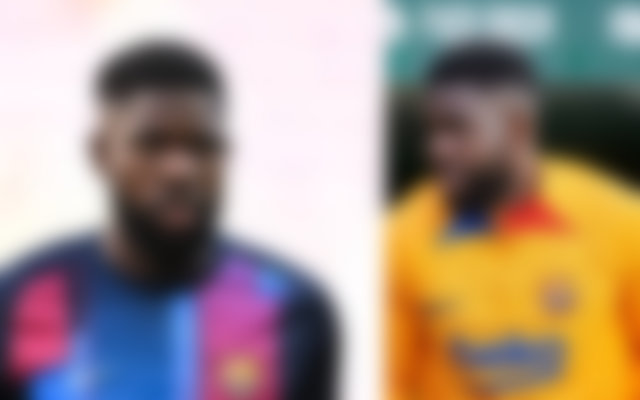 According to reports, Samuel Umtiti has made his peace with the prospect of leaving Barcelona and moving back to Ligue 1 with his previous club Lyon in the next summer transfer window

The chances that Barcelona would be able to unload Samuel Umtiti during the summer transfer window have been given a boost, as stated in a story that was published in the French daily L’Equipe. The French defender is prepared to leave Camp Nou, and his first choice for his next club is his old one, Lyon, who are now dominant in Ligue 1 competition.

Samuel Umtiti moved from Lyon to Barcelona in July of 2016, amid a great deal of anticipation and enthusiasm around his arrival. The 28-year-old player arrived at Camp Nou with a growing reputation as one of the best young centre-backs in Europe, and he lived up to the hype in his first two seasons with the club.

However, after his first struggle with a bothersome knee problem, he began a slow drop that continued for some time. Although Umtiti kept playing at a high level in the early days after recovering from the early fitness concerns, particularly up to the time when he won the 2018 FIFA World Cup with France, his performance levels declined significantly after that point.

The French international is a mere shadow of the unstoppable centre-back he used to be a few years ago, and it should come as no surprise that he has become a peripheral character at Camp Nou. Gerard Pique, Ronald Araujo, Eric Garcia, Clement Lenglet, and even Oscar Mingueza were all ahead of Umtiti in the pecking order for Barcelona during the most recent season, which has already come to a close. As a result, Umtiti made just one appearance for Barcelona throughout that season.

Where will Samuel Umtiti finally move to?

It seems doubtful that Umtiti’s future will improve for the 2022–2023 season given that the Catalan giants are looking to add numerous centre-backs to their roster. It has been claimed that Andreas Christensen is close to completing a Bosman deal to join Barcelona, and it is expected that another central defender will come to Camp Nou before the month of September.

Therefore, Umtiti is not needed at the Catalan club, and Barcelona is prepared to get rid of him at the first available chance. And the player, who is now 28 years old, has made up his mind that he will leave Barcelona during the summer transfer window. He is at peace with the prospect of leaving the club.

The French defender will almost certainly sign with a club in either France or Italy, with his previous team, Lyon, being his first choice for a new home. Umtiti is finally ready to terminate his miserable stay with Barcelona, and Les Gones are mulling over the possibility of re-signing him after he played for them before.