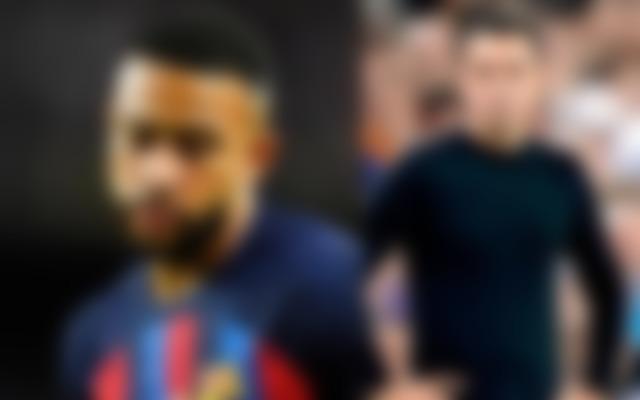 According to reports, Barcelona is demanding €2 million in exchange for Memphis Depay as negotiations with Serie A heavyweights on a January deal have progressed to an advanced stage

Reports from SPORT indicate that Memphis Depay is very close to signing with AS Roma. The Dutch attacker and the Serie A powerhouses have progressed negotiations for a January transfer. Additionally, Barcelona will want around €2 million in exchange for releasing the mercenary forward.

Since his Bosman transfer to Barcelona last year, Memphis Depay’s life has been everything but stable. Once the 28-year-old forward finished the 2021/22 season as Barcelona’s joint-leading scorer, he probably assumed he had done enough to win a lengthy rope at Camp Nou. But of days he mostly serves as a bench warmer for the Blaugrana.

The Dutch striker’s performance has been limited by a hamstring issue. And he’s only played for a total of 131 minutes over his first three games. So, Depay is eager to leave Barcelona in January, and Serie A powerhouse AS Roma is prepared to sign him.

The lack of a consistent wide attacker is a major weakness for Jose Mourinho’s team. While AS Roma’s offence has been full of smoke and mirrors so far this year. As a result, it should come as no surprise that the Serie A heavyweights want to strengthen their attacking unit when the transfer market reopens in the new year.

As a result, the Giallorossi have a realistic chance of signing Depay. Given the forward’s stated desire to leave Camp Nou, Roma has reason to go for him. The article claims that the Serie A powerhouses have had extensive discussions with the 28-year-old about a possible January transfer.

In addition, talks are ongoing between Roma and Barcelona over a possible transfer this winter. In addition, the Blaugrana will want around €2 million to let Depay go in the next January transfer window. Despite Depay’s desire to cash in on a sizable transfer bonus by leaving Barcelona as a free agent, it seems that this will not happen.

Jordi Cruyff, the director at Barcelona, has denied the rumours that have been circulating around the 28-year-old. In spite of the club’s failure to bring in a new player this month, Cruyff recently stated that Depay would not be sold by the Catalan giants. Whether or not the Dutchman really moves to Serie A will be fascinating to see.