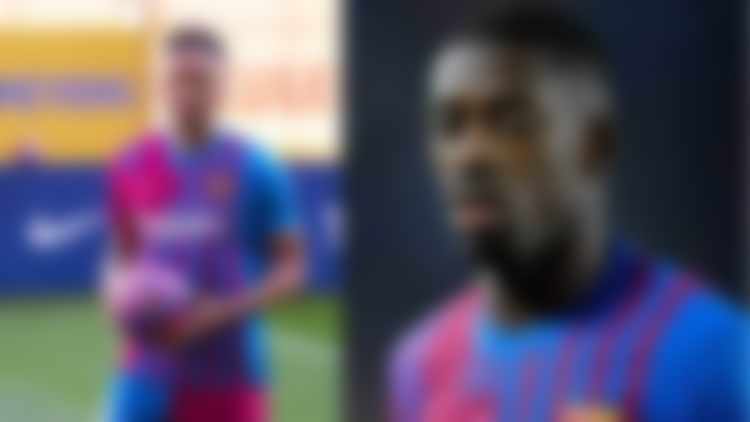 Pierre-Emerick Aubameyang, following his free move to Barcelona, revealed that he told Ousmane Dembele to stay at the club. The Gabon international striker joined Barcelona this January and is keen on playing with Dembele. Aubameyang believes that his ex-Dortmund teammate can find his spark at FC Barcelona.

On transfer deadline day, Aubameyang landed at the Camp Nou, ending his four-year affiliation with Arsenal. The striker had not scored in his first three games in all competitions since making the club, but he broke his goalless skid this weekend.

In a 4-1 triumph for Barcelona, the former Arsenal star scored three goals, latching onto Jordi Alba’s long pass before smashing home his first on the half-hour mark. His second goal was significantly easier to score, as all he had to do was tap Gavi’s cross into an empty net.

In a fortunate second-half finish, Pierre-Emerick Aubameyang completed his hat-trick. The ball pinched off his shirt and soared past Giorgi Mamardashvili in the Valencia goal as he turned his back to evade Pedri’s long-range shot. After the game, Aubameyang was given the goal after it was originally credited to the young midfielder.

While talking to the media, Aubameyang reflected his happiness after scoring the hat-trick: “I’m very happy, I’m very happy, the important thing is that we won the game. The last time I played here at the Mestalla I scored a hat-trick with Arsenal, I like playing here, it’s like my home.”

After enjoying success together at former club Borussia Dortmund, Aubameyang has now stated that he persuaded Dembele to sign a new contract at Camp Nou.

When he joined Dortmund 6 years, Dembele said: “Auba is very important for me. He is my roommate, but he also translates on the pitch when the coach gives instructions.”

Now that they have united again at Barcelona, Aubameyang has revealed that he wants Dembele to stay at Camp Nou and extend his contract.

“To tell the truth, I am very happy that he is here and when I arrived I told him: ‘You have to stay, bro!’, Aubameyang revealed.

“It is something very special [to play with him] because we had an incredible year in Dortmund and he is an incredible player. Ousmane is one of the best on the ball and as a striker he is incredible.

“I don’t know [if he’ll stay], but the only thing I can say is that everything is possible in life.”

The duo will expect to feature against Napoli this Thursday when Barcelona travels to Italy to face the Italian giants in the second leg of the Europa League.

Will Ousmane Dembele consider the request of his teammate and sign a new contract with Barcelona? We will find out in the coming months. Stay tuned!