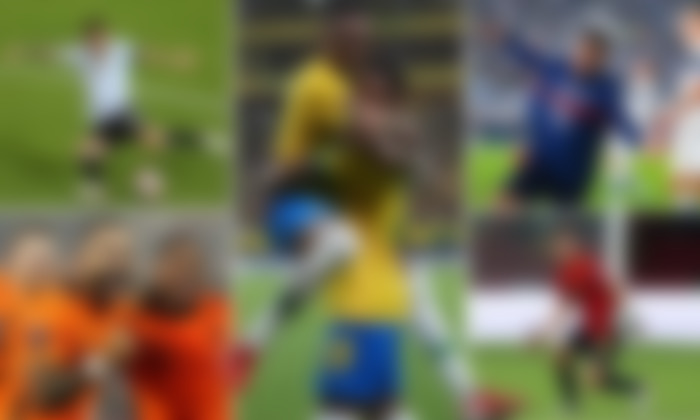 The 2022 World Cup gets underway on November 20th with games being held across eight stadiums in Qatar. As well as being the first World Cup to be held in an Arabic state, the 2022 tournament will be the final edition to feature just 32 teams, with that number set to increase by 50% ahead of the 2026 World Cup.

With four matches taking place per day during the group stage, global football fans are relishing the chance to watch some of world’s finest footballers compete on the biggest stage across a hectic four week period. We’ve taken a look at the top five teams who the experts’ and analysts are tipping to potentially lift the Jules Rimet Trophy on December 18th.

Brazil were one of the first teams to qualify for the tournament and they have been priced up as favourites by the majority of the FIFA World Cup 2022 betting sites. Managed by Tite, the five-time winners have an impressive record in this tournament and they breezed through qualifying collecting 45 points across their first 17 matches and conceding on just five occasions.

As well as possessing one of the best goalkeepers at the World Cup in Allisson, the Selecao have an enviable amount of firepower within their squad, however, the enigmatic, yet immensely talented Neymar Jr, is likely to steal the majority of the headlines.

With recent Man United signing Antony, Champions League winning wide-man Vinicius Jr, the experienced Casemiro and the combative Fabinho all set to be named in the squad, Brazil may take some stopping in Qatar.

As the World Cup statistics attest, it is extremely difficult to retain your title, with Brazil’s 1962 squad being the last side to successfully defend their crown. As a result, reigning champions France may find it tough in 2022. Nevertheless, Didier Deschamps’ side still have ample firepower with Kylian Mbappe, Antoine Griezmann and potentially Karim Benzema likely to feature.

Despite this, Les Bleus have been in poor form throughout 2022 and they look a little vulnerable at the back.

The Three Lions are another side who have not enjoyed a particularly profitable 2022 and Gareth Southgate’s side were recently relegated from their Nations League group. Nevertheless, they reached the final of Euro 2020 and have plenty of talent at their disposal.

Southgate has occasionally been accused of taking a conservative approach to matches and it’ll be interesting to see whether the former defender opts to release the handbrake in Qatar.

Harry Kane netted six times in Russia and the Spurs striker has been priced up as the early frontrunner in the top goal-scorer betting market. He is likely to start every single match and is likely to be England’s designated penalty taker.

If it’s recent form that you’re searching for, then look no further than Argentina. La Albiceleste are on an impressive 35-match unbeaten streak and haven’t tasted defeat since the 2019 Copa America.

They also possess the immensely talented Lionel Messi, who is likely to be embarking upon his final major tournament appearance and will be determined to end on a high.

Messi will feature alongside an impressive roster of attacking players including Manchester City’s Julian Alvarez, Ajax’s Lucas Ocampos, Fiorentina’s Nicholas Gonzalez and Inter’s Lautaro Martinez, if fit. The experienced Angel Di Maria will also be named in the squad, alongside potential future stars, Thiago Almada and Enzo Fernandez, who plies his trade at Benfica.

Spain were victorious at this tournament in 2010 and after a decade of frustration, Luis Enrique will be hoping to guide La Roja back to glory in Qatar. Enrique is meticulous in his approach and Spain will be suitably well-drilled and boast exceptional fitness levels.

Despite a plethora of technical quality, there are still questions about Spain’s ability to beat top level opposition. Nevertheless, they have an excellent record against Germany and they’ve been drawn alongside Hansi Flick’s side in Group E. Expect them to progress to the knock-out stages with the minimum of fuss.