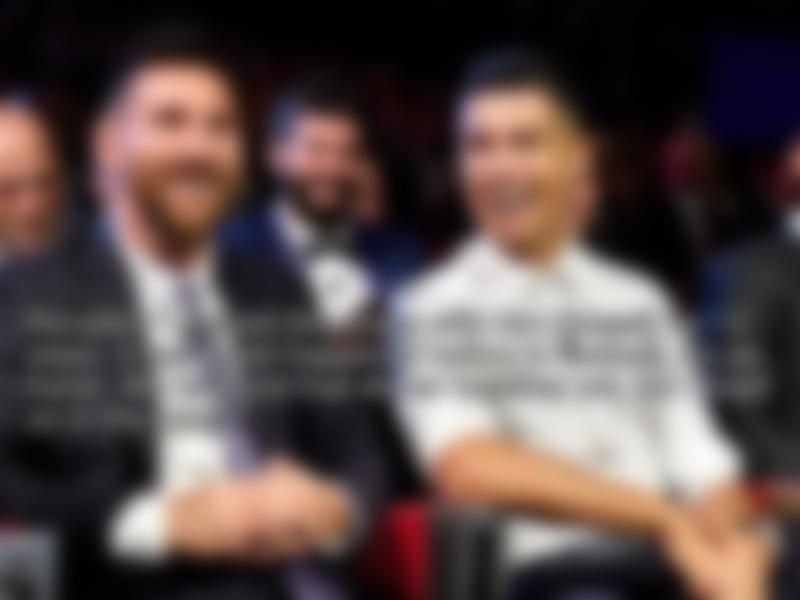 Today, we are going to take a look at 10 sayings by Cristiano Ronaldo on Lionel Messi. After watching these star players for more than a decade, it is safe to say that Messi and Ronaldo are the best players of our generation. They have won everything that’s there to win in football. Messi and Ronaldo have been exceptional performers for club and country in the last one and a half decades. They now have a major international title against their respective names too. Surprisingly, Cristiano Ronaldo and Lionel Messi both won international titles on the same day, with a gap of 5 years.

Both Messi and Ronaldo are past their 30s, but they are showing no signs of stopping. Messi recently helped Argentina win the Copa America and ended up being the tournament’s top scorer. Cristiano Ronaldo won the award for being the top scorer in Euros 2020 as well. So even in their 30s, Messi and Ronaldo are smashing records after records in football.

Messi vs Ronaldo debate is still very popular among the fanbases, but both the players have mutual respect. Over the years, they have stretched this subject and talked about their achievements in comparison with the other.

But now, we will be taking a look at 10 sayings by Cristiano Ronaldo on Lionel Messi.

After the match ended, Cristiano Ronaldo said that he never saw Lionel Messi as a rival:

“Leo and me shared the last twelve, thirteen, or fourteen years of our lives. “I’ve always had a cordial relationship with him, I never saw him as a rival. It’s the press that creates the rivalry. If you ask Leo, he’ll tell you the same thing. It’s always beautiful to play against him. Obviously, people will talk about our rivalry when we meet, but it’s just a great privilege for me.”

Two years after leaving Real Madrid, Ronaldo said that his ‘rivalry’ with Messi made him a better player. He also believed that the rivalry made Messi a better player as well. The duo kept on scoring goals after goals, albeit for different teams. But it seemed clear that Cristiano Ronaldo missed the La Liga rivalry with Leo Messi.

In an interaction with TVI in Portugal before the start of the 2020-21 season, a quote by Cristiano Ronaldo on Lionel Messi:

“I really admire the career he has had and from his side, he has already talked of the disappointment when I left Spain because it was a rivalry that he appreciated. It’s a good rivalry but it’s not unique — Michael Jordan had rivalries in basketball, there was Ayrton Senna and Alain Prost in Formula 1

“I do not doubt that Lionel Messi has made me a better player and vice-versa. When I am winning trophies it must sting him and it’s the same for me when he wins,” Ronaldo said.

Without any surprise, Ronaldo started to bang goals in Italy, just like he did in any country he played. But he seemed to be missing his rival Leo Messi. In 2018, Cristiano Ronaldo urged Leo Messi to join him in Italy, after he’s done with Barcelona.

“I’d like him to come to Italy one day. I hope he accepts the challenge like me, but if he’s happy there then I respect that,” said Ronaldo to the Italian media.

When the press asked if Ronaldo missed Messi:

“No, maybe it’s him who misses me …I’ve played in England, Spain, Italy, Portugal and for my national team, while he’s still in Spain. Maybe he needs me more… For me, life is a challenge, I like it and I like to make people happy. He’s a fantastic player and a good guy, but I don’t miss anything here.”

In 2018, Cristiano Ronaldo became the first player to win five Champions League titles. The Portuguese won the continental competition for the first time with Manchester United in 2008 before winning with Real Madrid in 2014, 2016-18.

In an interview with DAZN Canada in 2019, Ronaldo said that he respected the brilliance of Lionel Messi and his achievements. But what separated the two was the fact that while Lionel Messi has won the Champions League (four times) with Barcelona, Ronaldo has done so for multiple clubs. The subtle dig by Cristiano Ronaldo on Lionel Messi is below:

Cristiano Ronaldo always acknowledged Leo Messi’s greatness and the things he did for his club. Ronaldo thought he and Messi were miles ahead of the rest. The statement was hardly far-fetched. Ronaldo, 33, and Messi, 31, at the time, were easily the best players in football, scoring at least 30 goals a season in their respective campaigns.

In 2018, when asked, the Portuguese superstar told France Football regarding the Ballon d’Or nominees for the year:

“How many players are capable of playing at the highest level for more than 10 years? You count them on one hand. There are two, Messi and I.”

Neither player won the Balon d’Or that year. but Messi ended up winning it the following year, making it 6 Balon d’Or awards in his name.

Shortly after his arrival at Juventus on a big-money move, Ronaldo told a Portuguese outlet that he had no rivalries with any player, not even Messi.

Cristiano Ronaldo said in this regard to O Jogo:

“I don’t have rivalries against players, I never have. That’s not in my ethics. Juventus will try to win every game and be as regular as possible. It was a beautiful challenge with Messi; they liked it and it was interesting. But I didn’t see it as a rivalry.”

Eight years after his ‘rivalry’ with Leo Messi, Cristiano Ronaldo opened up about his ‘relationship’ with the Argentinian. In an interview with Fox Sports Argentina as quoted by the Mirror, Ronaldo admitted that he was not ‘friends’ with Messi, but the pair enjoyed a decent relationship and shared mutual respect with each other.

“In terms of my relationship with Messi,” he says, “I’m not his friend, but we are colleagues. We’ve shared a lot of moments together in premieres over the last 10 years and I have a very good relationship with him. We don’t sit down to eat together, but I respect him. He’s a work colleague, not a rival.”

In the same interview, Cristiano Ronaldo added that he enjoys watching good footballers like Messi and he ‘likes’ the Argentinian.

“I like to see all the good footballers and he is one of them, it’s a good crack. I really enjoy seeing him play. How would I not like someone who hasn’t done anything bad – it’s the opposite. When they ask Messi about Cristiano, he also talks positively about me. My relationship with him is cordial, and we have mutual respect for each other.”

In 2010-11, Cristiano Ronaldo (40) became the first player within the history of the Spanish top flight to breach the 40-goal barrier. the subsequent season, although Messi beat him to the 50-goal mark, Ronaldo scripted another unreal campaign, banging 46 goals to assist Madrid to win the La Liga title.

After winning his first La Liga title with Real Madrid, Ronaldo said that he was tired of comparisons with Leo Messi.

“Sometimes (the comparisons with Messi) makes me tired … for him too because they compare us together all the time. You can’t compare a Ferrari and a Porsche, because they have different engines.

“It’s the first time and I’m very happy because it’s the most important trophy. It will be hard to match a year as good as this, because the Spanish league is the toughest in the world, and competing with Barcelona, as we all know, is very difficult.”

Cristiano Ronaldo won his first Champions League trophy in 2008 and won the World Player of the Year Award after a brilliant 42-goal season. The following year, his Manchester United side was beaten by Messi’s Barcelona in the final of the Champions League.

After losing the final 2-0 to Barcelona, Cristiano Ronaldo said that the final was not about him or Messi.

“This game we play is about the team, not individuals. This final is not about me and Messi. It is between Manchester United and Barcelona. Both are winners of their national titles, and I predict that it will be a spectacular duel.”

2015 saw the peak of Messi and Ronaldo ‘rivalry’. Lionel Messi had helped his Barcelona side to a second continental treble in six years. The Argentinian looked to be winning another Balon d’Or award in his career. Cristiano Ronaldo said that he “couldn’t care less” about his ‘rival’ winning the Ballon d’Or award.

Ronaldo told Kicker Magazine (as quoted by FotMob) in this regard:

“I don’t care if Messi wins the Ballon d’Or. I know that it is not in my hands whether I win this award or not. It all depends on others. I have always remained the same over the past eight years of my career. I have always played at a very high level. Name me one other player in the history of the game who has done the same.”

Ronaldo expressed that he was the best in the game:

“But I think I am the best. Everybody should ask himself why you would not want to be the best at what you do. I think this attitude is one of the reasons why I have improved so much throughout my career and why I have achieved so much.”